Movie Review: Ron Howard Creates a Dazzling Piece of Technical Filmmaking With "In The Heart of the Sea" 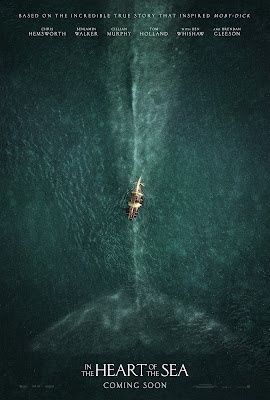 
A common refrain from detractors of director Ron Howard is that he has no distinctive style of his own, and it's impossible to define inherently what is "a Ron Howard film". While it's true that he varies unpredictably from one genre to another and does not provide his films with a singular worldview as many aueteurs might do, we offer that there is a definite answer to what a Howard film is: it's Opie Taylor saying "Pa, I wanna be an astronaut" or "I wanna be a firefighter"or boxer or race car driver or whatever, and then living that experience and taking us with him. Where other filmmakers might choose simply to tell a story set in the world of a particular pursuit, Howard wants the visceral experience of what it's like to live that pursuit,  and more than any other director working today he wants to put us inside that experience. With his his new film, In the Heart of the Sea, he gives us that experience with the sea-faring life of the 19th century, and does so with every bit of his considerable visual and technical skill. 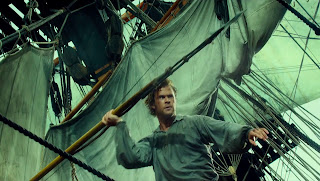 Based on Nathaniel Philbrick's bestseller of the same name, In the Heart of the Sea tells the story of the Essex, a whaling ship said to be the inspiration for Moby Dick. In fact, the film's framing device involves a young Herman Melville (Ben Whishaw) meeting with a survivor of the Essex and hearing his story. The survivor is Thomas Nickerson (Brendan Gleeson), who had just begun his sailing career as a fresh-faced 14 year old (played at this age by Tom Holland, Marvel's new Spider-Man), and the the bulk of the film is clearly from the point of view of its chief protagonist, First Mate Owen Chase (Chris Hemsworth). This is a problem with the narrator framing device which frequently frustrates and confuses us: your storyteller can't provide the point of view and first hand account of events for which he was not present. It simply doesn't make sense. Anyway, The Essex sails out in search of whale oil, but runs into an encounter with an enormous white whale which puts the crew in a desperate and harrowing struggle to survive. 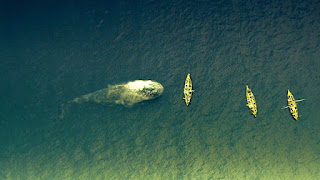 From a visual and technical standpoint, this ranks with Howard's best work, which is high praise. His eye for shot selection and skill with guiding the camera's movement ranks among the best in Hollywood today, and here he creates several eye-popping sequences, helped along by cinematographer Anthony Dodd Mantle and by his longtime editors, the great Mike Hill and Dan Hanley (who deserve serious Oscar consideration for this one). Howard also admirably creates the feeling of being stuck on board a cramped vessel, and actually plays the ship as small as it should be instead of letting it seem huge for the sake of convenience.  Howard has made us part of the sailing and whaling experience here as expertly as he's brought us into spaceflight and firefighting.

The weakness of In the Heart of the Sea is that the characters aren't nearly as engaging as the ones in Apollo 13. Hemsworth is certainly capable of carrying a film, but Chase's character arc is largely consumed by a mutual frustration and rivalry between himself and new Captain George Pollard (Benjamin Walker). While the evolution of the relationship between them eventually becomes quite compelling, it's a slow burn which leaves us no one with whom to bond and identify for the first half of the film, and this keeps us from getting as emotionally engaged as we want to be. Additonally, for all it's harrowing (and sometimes disturbing) human drama of survival,  the film never reaches the point where it feels it has anything of great importance to say, or any truly deep insight, despite an all around solid cast of performers. 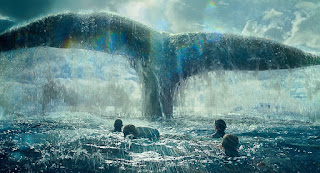 However, In the Heart of the Sea is above all else an epic seagoing adventure, and there's no question
Howard has succeeded at providing that with with skill and vision.  It's a superb piece of directorial virtuosity, and if it fails to be as emotionally satisfying as it wants to be, it's still spectacular filmmaking.