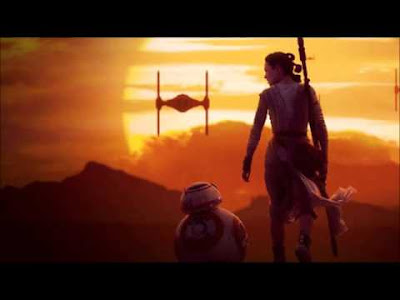 Rey's Theme from the soundtrack to Star Wars The Force Awakens is quickly becoming a fan favourite.  Track number six on the album, the music takes a change of pace from the opening tracks with ascending strings and woodwind melody that will evoke emotions similar to the Force theme from previous Star Wars movies.  The theme is featured earlier in The Force Awakens soundtrack and is first heard in track two, The Scavenger.  I suspect that this piece will feature again in episode VIII and could easily become one of the principle pieces to the new trilogy.

The piece reminds me of previous soundtracks, especially The Terminal and War Horse with a hint of Harry Potter.  It really is the stand out piece on the soundtrack with a third motif that will leave you smiling.  You can listen to the piece below.  The track is 3 minutes 12 seconds long.  Let me know if you enjoy the track.

Coming up next we will have a review of track ten on the soundtrack to Star Wars The Force Awakens, Finn's Confession.