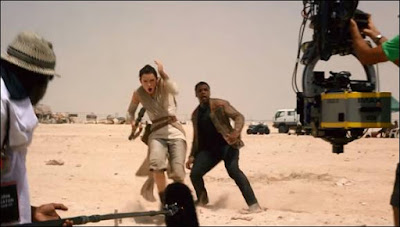 The new IMAX Behind-the-Frame featurette takes you behind-the-scenes to see how IMAX cameras were used to put Star Wars fans into the centre of the action like never before. The featurette provides exclusive commentary from Director J.J. Abrams and the Star Wars cast – including Harrison Ford, Daisy Ridley, John Boyega, Gwendoline Christie, and Adam Driver.
On December 17, the latest installment in the world-renowned series, Star Wars: The Force Awakens, will hit theatres and the only way that fans can truly become part of the action is by experiencing it in IMAX® 3D.
Director J.J. Abrams commented: “That feeling of going to the movies and having a fully immersive, powerful, high-quality presentation of the film is something that is more valuable than ever and I think IMAX stands for that. When you go to see a movie in that format you know you are going to get something that is the best version of going out to the movies.”
Abrams shot key sequences of Star Wars: The Force Awakens using IMAX cameras - the highest-resolution cameras in the world. Only in IMAX theatres will these sequences expand vertically to fill the entire screen with breathtaking image quality for a truly immersive experience.
About Star Wars: The Force Awakens
Lucasfilm and visionary director J.J. Abrams join forces to take you back again to a galaxy far, far away as Star Wars returns to the big screen with Star Wars: The Force Awakens. The film stars Harrison Ford, Mark Hamill, Carrie Fisher, Adam Driver, Daisy Ridley, John Boyega, Oscar Isaac, Lupita Nyong’o, Andy Serkis, Domhnall Gleeson, Anthony Daniels, Peter Mayhew and Max Von Sydow. Kathleen Kennedy, J.J. Abrams and Bryan Burk are producing with Tommy Harper and Jason McGatlin serving as executive producers.
The IMAX release of Star Wars: The Force Awakens will be digitally re-mastered into the image and sound quality of An IMAX 3D Experience® with proprietary IMAX DMR® (Digital Re-mastering) technology. The crystal-clear images coupled with IMAX's customized theatre geometry and powerful digital audio create a unique environment that will make audiences feel as if they are in the movie.
For more information, please visit: https://www.imax.com/movies/m/star-wars-the-force-awakens-an-imax-3d-experience/
EXPERIENCE IT IN IMAX® 3D DECEMBER 17th
Tickets Available Now!
The Bearded Trio - The Site For Steven Spielberg, George Lucas and John Williams
THE BEARDED TRIO ON FACEBOOK
THE BEARDED TRIO ON TWITTER
THE BEARDED TRIO ON GOOGLE+
THE BEARDED TRIO ON PINTEREST
CLICK HERE FOR FACTS ON STEVEN SPIELBERG
CLICK HERE FOR FACTS ON GEORGE LUCAS
CLICK HERE FOR FACTS ON JOHN WILLIAMS