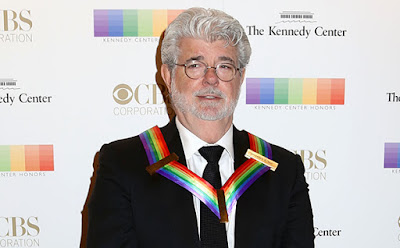 George Lucas was recognized for his contribution to American culture through the arts on Sunday night at the Kennedy Center Honors celebration and some pals and leaders of nations paid tribute to the Star Wars creator.

Carrie Fisher was announced on stage but instead R2-D2 wheeled out on stage and in typical Star Wars fashion projected her image.  She said:

“I wanted to be there to help celebrate your Kennedy Center honor in person, but hey, since you invented video voicemail, I don’t have to be."

Steven Spielberg paid tribute to his pal of many years:

“Think about how many children have been raised, at least in part, by George Lucas,” he began. “Think about how many young people searching for their place in the universe have thought to themselves, ‘If a kid from Tatooine moisture farm can go from bulls-eyeing womp rats in his T-16 to saving the galaxy, then maybe I can be something special too?’

“George, I don’t know if you’ve heard, but they might even make a brand-new Star Wars movie soon. It’s very low-key, it’s not getting a lot of promotion,” Obama joked. “But it’s also pretty remarkable that nearly 40 years after the first Star Destroyer crawled across the screen, we are still obsessed with George’s vision of a galaxy far, far away. And we’ll be raising our children on his stories for a long, long time to come.”

Others who were honoured during the event were Carole King, Seji Ozawa, Cicely Tyson, and Rita Moreno at the ceremony.