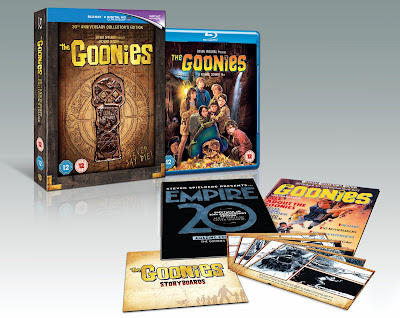 To celebrate the release of cult classic 'The Goonies 30th Anniversary’ on Blu-rayTM and Digital Download from 9th November, we have prizes in store for four lucky winners!

“The Goonies” plunges a band of small heroes into a swashbuckling, surprise- around-every- corner quest beyond their wildest dreams!
Following a mysterious treasure map into a spectacular underground realm of twisting passages, outrageous booby traps and a long-lost pirate ship full of golden doubloons, the kids race to stay one step ahead of a family of bumbling bad guys... and a mild-mannered monster with a face only a mother could love.
A family adventure classic from start to buccaneering finish, “The Goonies” is a cinematic treasure trove of breathtaking action, dazzling effects and shiver-yer-timbers thrills!

We’ve got four copies of ‘The Goonies 30th Anniversary Collector’s Edition’ to giveaway on Blu-rayTM (which also includes Digital Download).

To be in with a chance of winning this fantastic prize, all you need to do is answer the movie question below:

The Goonies set out on a quest to find whose treasure?