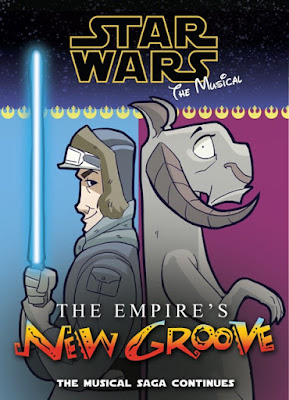 Star Wars Musical is a fan film that spoofs Star Wars as a Disney Musical, colliding two of the galaxy's biggest fandoms. Having completed the first episode which recently won the Best Short Film award at Stan Lee's Comikaze GeekFest Film Festival, the team behind this mashup is crowdfunding their next episode and are excited to be chosen to be a part of Rockethub and Ovation TV's Creative Studio, where they compete for a chance to be featured on TV and win $5000 towards funding the project.

Star Wars Musical achieved viral success with over 250,000 views and restless excitement for the following sequel. With solidifying plans for Star Wars Musical’s take on Episode V: Empire Strikes Back just around the corner, executive director and composer George Shaw is seeking bigger aspirations for his musical project. The team is aiming to release their adaptation, entitled “Star Wars Musical: The Empire’s New Groove” by December 2016, with the support of devoted Star Wars and Disney fans!

Through this campaign, the team hopes to bring their passion project to a whole new level in terms of quality and production and present it to fans who share the same affection for their geekdoms worldwide.

Support the crowdfunding campaign here: http://bit.ly/StarWarsMusical
Rewards video on Instagram: https://instagram.com/p/9TsWCqumJe/
About the Creators
Composer George Shaw recently co-wrote “Ode to Geeks” with Marvel Comics legend Stan Lee and produced a music video featuring a chorus of geek voices assembled across the internet. He also composes for Geek & Sundry's Tabletop show hosted by Wil Wheaton (Star Trek: The Next Generation), music directs the Geekie Awards in his 3rd year, and created the viral hit Star Wars Musical out of his passion for Star Wars and Disney. He followed it up with Netflix Musical,which stars Harry Shum Jr. (Glee) and Chrissa Sparkles. YouTube videos featuring George’s music have amassed over 150 million views.