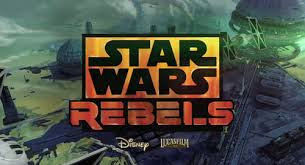 Ezra feels that he is given too much to do during shooting practice, but he seems to get a lucky break when Hera calls a meeting, but alas he gets scorned for not doing cleaning duty and is left behind to finish while the rebels go on a supply mission. 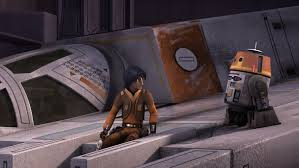 Chopper is left behind too and they answer a distress call which leads them to fly off world in The Phantom to Vizagos' ship and find our old witty pirate pal Hondo! Ezra tells him his name is Lando Calrissian!
They reach an Imperial checkpoint but blast to hyperspace just in time!
Hondo reveals he is on a mission and wants to enlist Ezras help. They land on another ship where they meet the goblin king who double crosses them and tries to kill them, but before he can, its Chopper to the rescue!!
The little droid bursts in and wreaks havoc, a fire fight ensues with the gun totting slinger Chopper & Ezra earning their stripes. During the fight Ezra uses the force which alerts Hondo to the fact that he is a Jedi & Hondo tries to persuade him that they should team up, and Ezra become a Pirate Jedi 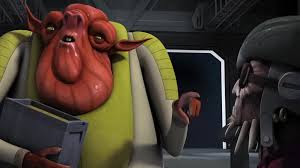 Ezra finds his old friend locked in the ships brig, it seems Hondo hijacked the ship! Ezra releases him and the 3 try to reach a deal until Vizago double crosses them both, its every man and alien for himself as Hondo escapes with all the loot and Ezra escapes in an escape pod, only to find Hondo with the crew of the Ghost! 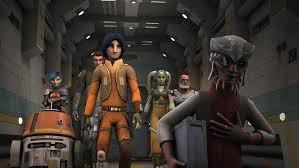 A good solid episode! Hondo whom you may remember from The Clones Wars animated series has a joyous sarcastic wit and another brilliant flash point is Chopper wielding two blasters and looking like he should be more in the Wild West as oppose to a Galaxy Far Far way! By the end of the episode it seems it seems Ezras' insecurities have been resolved and he takes another step on his Jedi journey!