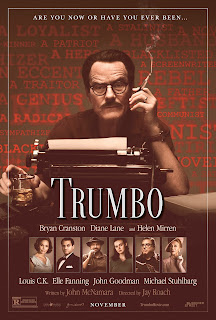 From 1947 to 1960, Dalton Trumbo was one of a long list of Hollywood talents who was banned from working in the film industry because of their connections (or alleged connections) to the Communist Party of America. During this time, Trumbo continued to write under the table, using aliases (and winning two Academy Awards without his name on them). Bryan Cranston, the Emmy-Winning star of Breaking Bad, now brings Trumbo to life in a new biopic from director Jay Roach (Austin Powers).

As the film begins, Trumbo and his cohorts are just beginning to really worry about the effect Senator Joseph McCarthy and the House Un-American Activities Committee are having on Hollywood, aided by zealous Hollywood anti-Communist crusaders like John Wayne (David James Elliott) and gossip columnist Hedda Hopper (the always excellent Helen Mirren, who plays Hopper as a sort of Muggle Delores Umbridge). When Trumbo and nine others are summoned to testify before the committee, they choose not to answer the question, knowing they will be charged with contempt but confident that the left leaning Supreme Court will let them go on appeal. But things don't go as planned for the Hollywood Ten, and they end up behind bars. 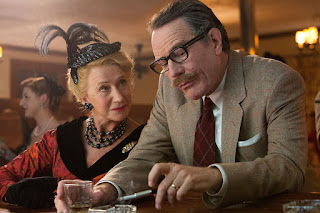 The early section of the film plays a bit too much like a series of vignettes rather than a fluid piece of storytelling, but it's helped along considerably by clever dialogue and a very strong cast. Cranston finds himself in the difficult position of choosing whether to play a flamboyant character as he really was, and therefore comes off a bit theatrical at times. Nevertheless, it's a riveting performance from a great actor, and the film certainly avoids the trap of worshipping its subject. Trumbo and the others come across as deeply flawed people who, for the most part, are just trying to keep their careers afloat. Trumbo himself is a contradiction, one who speaks revolutionary rhetoric with the conviction of a Bolshevik, yet lives an opulent Hollywood lifestyle more befitting an ardent capitalist. 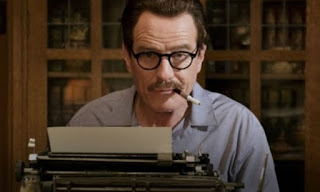 Louis CK, as Arlen Hird, a composite character, adds depth to the proceedings with a low-key and authentic performance.  Alan Tudyk is entertaining as always, and Michael Sthulbarg continues to prove he is one of Hollywood's most undeppreciated actors with his flawless turn as screen legend Edward G. Robinson.
The film really settles into a groove during its second act, which concentrates on Trumbo writing anonymously for a schlock production company (run by the typically hilarious John Goodman), and on his declining relationship with his family. Diane Lane is solid as Trumbo's wife, but it's Elle Fanning as his daughter Nikola that really impresses. Fanning is quietly maturing into a first-rate actress.


The third act, focusing on Trumbo's experience writing Spartacus for Kirk Douglas and Exodus for Otto Preminger, is wildly entertaining, with The Hobbit's Dean O'Gorman making a fine Douglas and Christian Berkel stealing every scene he's in as Preminger.

Trumbo is a story more people should know, and Roach and company have told it very well. It's a must see for fans of history,  or of Hollywood's golden age. The film is at turns engrossing, heartbreaking and uproariouly funny. It's a powerful treatise on the importance of individual conscience brought to life by an exceptional cast, and it's message couldn't be more timely as the politics of fear continue to dom I nate our national landscape.  Though it doesn't seem to be gaining a lot of traction in this year's Oscar race, it's a definite contender for my Best of the Year List. 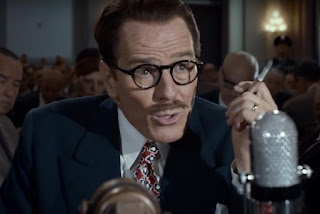