COMPETITION - Win a pair of tickets to see The War of the Worlds! 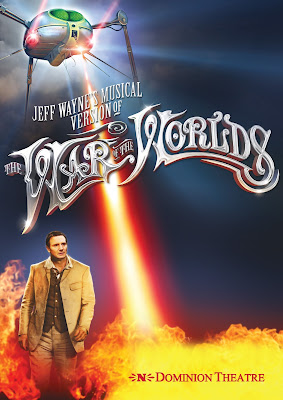 Win a pair of tickets to see The War of the Worlds!
MULTI-AWARD WINNING MUSIC PHENOMENON
JEFF WAYNE’S MUSICAL VERSION OF THE WAR OF THE WORLDS

Since its inception in 1978, Jeff Wayne’s original double album has become one of the most ground breaking and best-selling musical works of all time – with over 15 million copies sold and 330 weeks in the UK Album Charts to date, a number one album in 11 countries, two international hit singles, a number-one music DVD, 8 years of worldwide arena tours, and huge critical acclaim across the globe (and probably the universe!).
Reimagined and brought to spectacular theatrical life for its world stage premiere, this breath-taking new production of Jeff Wayne’s Musical Version of The War of The Worlds, produced by Bill Kenwright, will preview at the Dominion Theatre from Monday 8 February 2016 with an opening night gala performance on Wednesday 17 February at 7pm.
The iconic score is played live and conducted on stage by Jeff Wayne. The show will include new music, a star cast, and a full supporting company of performers – as well as video walls, the iconic Martian Fighting Machine, special effects and in 3D holography LIAM NEESON as The Journalist.
The War of the Worlds
Dominion Theatre
Tottenham Court Road
London, W1T 7AQ
8th February – 9th April 2016

The Bearded Trio are giving one lucky winner a pair of tickets to see The War of the Worlds at the Dominion Theatre in London.  This spectacular show features LIAM NEESON as The Journalist.  Witness the powerful music of Jeff Wayne's classic album come to life on stage with a star cast, video walls and of course the iconic Martian Fighting Machine.
To be in with a chance of winning answer the following question:

To enter leave your answer below or if you prefer you can leave your message on our Facebook or Twitter page.  If you want to email the answer you can email us here.  Good luck!