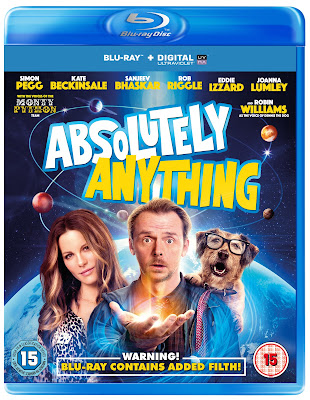 From LIONSGATE UK comes hilarious all-star comedy, ABSOLUTELY ANYTHING! The film sees Terry Jones (Monty Python) making a much-anticipated return to directing after a near 20-year hiatus, and will be available to own from 7th December.

The DVD and Digital HD are rated 12, while the Blu-ray™ has some added ‘sauce’ for a 15 certificate! All formats come replete with a host of behind-the-scenes special features, including cast and crew interviews.

The film follows a disillusioned school teacher, Neil Clarke (Pegg) who suddenly finds he has the ability to do anything he wishes, a challenge bestowed upon him by a group of power-crazed aliens (voiced by Cleese, Gilliam, Jones, Palin & Idle), watching him from space. As he struggles to deal with these newfound powers and the events that subsequently arise, he calls upon his loyal canine companion Dennis (voiced by Robin Williams) to help him along the way. Mishap after mishap finally leads him to the ultimate conundrum that all men dread and at which many have failed….should he choose the girl…or the dog…

Note: All enhanced content listed above is subject to change.