We Don't Need Roads: The Making Of The Back To The Future Trilogy. Book Review 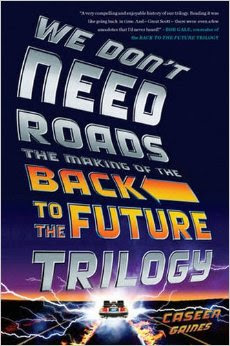 Back in July I attended London Film & Comic Con which had a Back to the Future theme.  Michael J. Fox, Christopher Lloyd and Claudia Wells were all in attendance to name a few.  Also present was the author Caseen Gaines to a wonderful book called 'We Don't Need Roads: The Making Of The Back To The Future Trilogy.'  Sat at a booth surrounded by props from the series and a model of Hill Valley I had to get my hands on his book.  A quick glance through I could already tell that this book was going to be a spectacular behind the scenes journey full of detailed tidbits to one of the most important movies of the 1980s.  I couldn't

wait to get started on the book.

Once back from Comic Con, I got to work on the book.  As predicted it was full of wonderful stories from the cast and crew and I found it difficult to put the book down.  So much behind the scenes goodness from one page to the next.  Want to know who the biggest diva on the set was?  The Delorean of course.  The book is incredibly detailed.  For example, how did they manage the change in roles between Eric Stoltz and Michael J. Fox?  Well the book explains this and the implications involved.

Eric Stoltz as most Back to the Future fans will know was originally cast as Marty McFly.  The first choice as admitted by Bob Gale and Robert Zemeckis for Marty was Michael J. Fox but he was busy doing 'Family Ties.'  The book explains how Stoltz took the role seriously and his style as a method actor soon became a realisation by Bob Zemeckis that it just wouldn't fit the light hearted role.  He needed and wanted Fox.  The book details how Zemeckis took his footage to Steven Spielberg and other top people in the industry and they all agreed that Stoltz had to be replaced.  The book explains how they were able to get a second chance at getting Michael J. Fox for the part of Marty McFly and also, something I really liked, the reaction from the cast members after hearing the news Stoltz was no longer on the team.

The arrival of Fox and his first scenes were immediately accompanied with enthusiasm by most as the cast could see he was definitely the right person for the part.  The book does, however tell us there were a few problems with bringing in a different actor.  Lea Thompson who played Lorraine Baines in the movie remembers how she was less than enthusiastic at first at hearing the news that Fox will be replacing Stoltz.  "Oh, my God, a sitcom actor?" was her reaction at first admitting that she was really snotty about it.  She did admit though that after she did a sitcom she realised it was the hardest thing in the world. 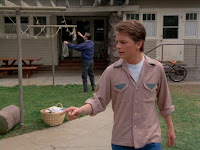 Another issue explained in the book was the difference in height between Stoltz and Fox.  Fox was shorter so some props had to be readjusted.  Such as the clothes line scene where McFly is talking to George about confronting Biff.  All Fox had to do was hang the clothes on the line but the crew soon realised that the scene was set-up for Stoltz and the line was too high for McFly to reach.  The pole was cemented in so not that easy to reposition.  Taking a piece out of the poles and welding it back together soon fixed the little problem but it soon became apparent that adjustments had to be made due to the role change.

Another problem with the height change in actors also impacted other cast members especially Melora Hardin who was originally cast as Jennifer Parker.  She had not filmed any scenes yet but production had already began when she successfully got the part.  Unfortunately it was realised that Hardin was taller than Fox and just wouldn't look right on screen.  Melora recalls in the book "They (Bob Gale and Bob Zemeckis) called me together and said that they were so sorry...It had nothing to do with me, but that they had to recast Eric.  I was just too tall for Michael J. Fox, but they had loved me and promised we would work together again in the future."  Bob Gale recalls "It was one of the hardest things I've ever had to do...I have no problem firing someone for cause but having to let her go because she was three inches too tall was a very tough conversation."


'We Don't Need Roads:  The Making of the Back to the Future Trilogy' is full of information like this and each page packed with testimonies from the set of the movies.  It really does give you the feeling you are standing there watching the films being shot.  The detail that has gone into this book, you can tell that Caseen Gaines is a big fan of the trilogy.  I even loved the introduction.  Caseen explains how he had managed to set up an interview with Robert Zemeckis via skype, who  rarely does interviews.  Minutes before the interview, Caseen's recording software stopped working.  Can you imagine the panic flowing through Caseen who is minutes away from an interview with the director of Back to the Future.  Caseen explains how he had to resort to using his mobile phone, pushing as close to the speaker as possible to record the conversation with no idea whether it was going to work or not.  Thankfully it did and we get to hear what Zemeckis had to say throughout the book.

It's 268 pages long and as mentioned packed with tidbits from all three movies.  It really belongs in any fans collection.  Caseen Gaines writing style makes you want to continue reading and has an easy read style.  A perfect book to celebrate October 21st 2015.

One of the best behind the scenes books I've read in a long time.

'We Don't Need Roads: The Making Of The Back To The Future Trilogy' is available from: