VIDEO: Doctor Who -- A Look Behind-the-Scenes of 'The Girl Who Died' 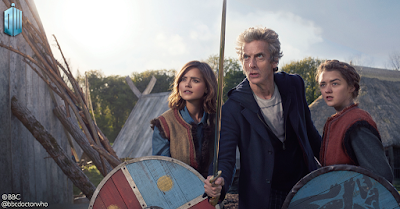 In last Saturday's episode of Doctor Who, "The Girl Who Died," we finally got a few answers about Maisie Williams' character, Ashildr. The nature of Doctor Who, however, often leaves us with more questions -- which is part of the appeal, right? Ashildr's story continues in the conclusion to this two-parter, "The Woman Who Lived." What more will be revealed? In the meantime, let's take a look behind-the-scenes of "The Girl Who Died."

Spoilers ahead, so look away if you're not caught up.

Peter Capaldi on the Mire, the alien race seen in this episode.

Guest star Maisie Williams decided to share her experiences on the set of Doctor Who via #MaisieCam!

Next time on Doctor Who -- "The Woman Who Lived"

For more on Doctor Who, visit the official website: http://www.bbc.co.uk/