VIDEO: Doctor Who Extras for "Before the Flood" and Trailer for Episode 5 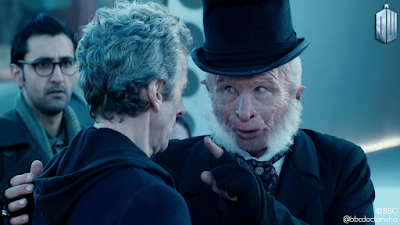 A few days have passed since the Doctor Who episode "Before the Flood" wrapped up the second two-parter of series nine -- so here's hoping you're all caught up! We're going to have a look at the newest installments of Doctor Who Extra, so -- if needs be -- look away now to avoid possible spoilers!

"Before the Flood," in which we meet the Fisher King....

Bit more from Paul Kaye as he recounts a childhood memory of Doctor Who.

Bonus: Doctor Who Theme-- The Rock Version! (I'd love for this to be permanent! Fits with Capaldi's Doctor nicely, IMO.)

Finally, here's the trailer for the next episode, "The Girl Who Died," featuring Maisie Williams (Game of Thrones).