VIDEO: Doctor Who Behind-the-Scenes with "The Woman Who Lived" 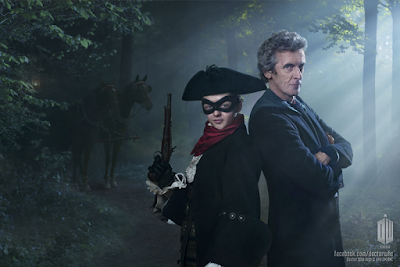 Spoilers ahead for last Saturday's episode of Doctor Who, "The Woman Who Lived!"

So, after all the rumors and rampant speculation, we now know the truth of Ashildr -- or, rather, Me. She is uniquely her own person, not the newest incarnation of a previous character. Turns out, she's a fascinating character, as well. We always imagine immortality would be a great thing -- but, would it really? This episode suggests the cons outweigh the pros.

It remains to be seen if Ashildr/Me will make a return appearance, although that final seflie shot certainly hints at a strong possibility. For now, why don't we take a look behind-the-scenes of "The Woman Who Lived?" In lieu of the usual Doctor Who Extra -- and on the heels of #MaisieCam -- we've got #RufusCam, featuring one of the co-stars of this episode, Rufus Hound (Sam Swift):

Cover up those tattoos...

Someone needs another take...

Co-star Maisie Williams (Ashildr, Me) on the hot seat:

A bit more chatting with Maisie...

Now we come to an introduction to next week's episode, "The Zygon Invasion," courtesy of Peter Capaldi and Jenna Coleman.

And here's the official trailer: