Remember many moons ago when you thought Star Wars Rebels had re-started with Siege Of Lothal?  Well now it has with Episode 2 "The Lost Commanders" 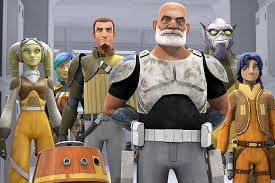 I could sum this episode up in about 2 sentences, but that wouldn't make for a great review!

The Ghost Crew are on a ship with the Rebel Fleet in space, and Ezra suggests they need to find base to operate from, Ahsoka Tano suggest's that they seek an old colleague from the times of the Clone Wars (hint!) Meanwhile Ahsoka is going to explore some Sith Lord guy all dressed in black, but thats another story!

Our heroes travel to a dusty wasteland of a planet and with the use of an old droid head they track down a modified Republic Walker trundling its way through the plain. Lo and behold on the walker they find the clones Captain Rex, Wolffe and Greggor! Due to Order 66 and the clones turning on their Jedi compatriots, you can kind of understand Kanan being a tad weary about mixing with old Clones, but as it happens these three clones didn't have the chips in their head like the other Clones and stayed loyal to their Jedi Commanders. Ezra is the voice of reason. 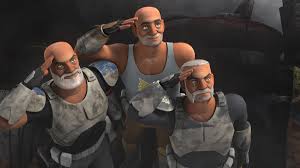 Rex and the Clones agree to help them find a base on the condition that they help them land some food, in the form of a massive creature called a Joopa.  Meanwhile queue the Jaws/Spielberg moment as they use Zeb as bait, spurred on by an over-enthusiastic vest wearing Greggor who has spent too much time in the sun and has gone stir crazy! Whilst the gang are catching the giant beast Wolffe the Clone contacts old mutton chops of the Empire 'Agent Kallus' to tell on the Rebels and Kallus sends a Probe Droid ala' The Empire Strikes Back to assess the situation 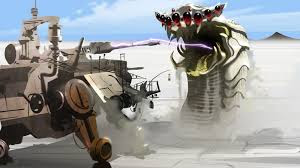 This was an okay proper start to the series, we were pretty spoiled with the brilliance of the Siege of Lothal mini-movie, and some filler episodes had to happen and not much happened in this episode really.  Good to see the faithful, older and bearded Captain Rex, a firm favourite with fans of the previous animated series The Clone Wars, given the disappointment over The Clone Wars being cancelled yet another character from that series being added can only be a good thing.
We saw in Siege Of Lothal, Ezra is quickly maturing in to a responsible apprentice, often being the voice of reason and offering up valuable ideas. And Sabine has had a makeover!

Hopefully this will turn out as good as Season One, and you cant go wrong with Spielberg-esque references!