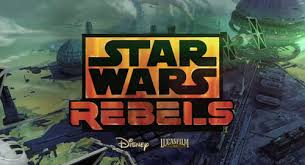 We begin during down time on The Ghost, which is the ship belonging to our group of rebels! In a tribute to Star Wars: A New Hope Captain Rex and Zeb are playing a game of Dejarik or Holochess if you prefer and Kanan is giving Ezra a Force lesson by lifting chopper, which unfortunately leads to a disagreement between Rex and Kanan about concentration, the angst between the two is still not resolved.
Meanwhile Hera sends Zeb, Sabine and Kanan to a deserted space station to try and find some supplies.

The three companions land on the seemingly deserted and eerie station, but it appears they are not alone!
They reach a console which requires powering up from Chopper, but in doing so the calamitous little droid powers up the entire station, which instantly and rather conveniently lights up on the Empires radar like a set of Christmas lights! 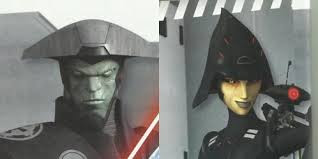 Unfortunately for our heroes the Imperials have with them a Samurai looking Inquisitor who decides to investigate after feeling a 'disturbance in the force'. The Rebels also do some investigating of the Space Station to look for supplies, leaving Chopper behind to get into trouble by wandering off and getting attacked by what looks like an evil looking mini probe droid!  Ezra has discovered that he can understand Chopper and they go back to assist him, but he & Sabine run into a another new Inquisitor (Sarah Michelle-Gellar) with an electronic voice and her pack of mini evil probe droids!!! So they run the other way and uh-oh run into the samurai Inquisitor, double skinny-spinning lightsaber trouble! 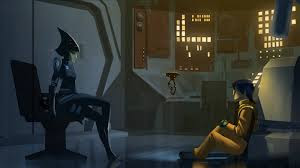 Ezra is captured and one Inquisitor uses him as bait, whilst the other goes to find Zeb & Sabine, the latter gets captured whilst Zeb escapes and is pursued by the mini electric pulse firing droids, whom he quickly destroys and goes back to The Phantom with Chopper

The Inquisitor interrogates Ezra and reveals they are after Ahsoka Tano. Zeb hatches a plan and lures the captors to a docking bay where the Rebels make their escape after a fire and force fight 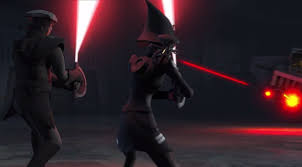 Another great episode of action and music!