Lets begin with Lando that slimy, smuggling scoundrel!
Aboard the Emperors stolen ship the Bounty Hunter Canath Cha, who was sent to recover or destroy the ship, turns out to be an old colleague of Lando's and he smooth talks her round to his way by cutting her in on their deal to sell the ships treasures and who can resist this smooth talker, right? 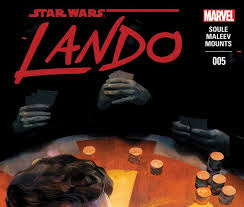 The 2 weird cat creatures arrive, but kill Landos arfifact specialist Ugnaught companion but while this is happening Lando & his Bounty Hunter lady friend escape and she sets off the ships self destruct!
They have to escape the ship before it blows, but first they have to get the loin cloth wearing Lobot out of the Bacta Tank which happens, but then the pesky lightsaber wielding cats turn up again!
Canath Cha hails her ship to dock for their escape but the plan backfires and the ships pilot droid flies off and it appears Lando and co are doomed.
But fear not, Lando and Canath kill the cats and get to the escape pods in time, where it appears Canath Cha and Lobot used to have a thing, but now Lobot has mentally lost the plot! They blast off just in time as the ship blows up behind them with Lando promising to make his old buddy better! 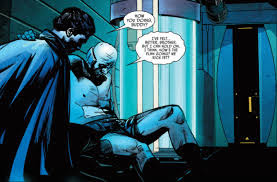 The overwhelming word that sums up this issue is 'ok', the story is predictable, but stable and Lando whilst not my favourite character is his normal self, I would've liked to have seen more Lobot.  The Cat things and the Ugnaught didn't do any justice to the story for me. Chanath Cha was a great Kick ass character and will prove popular as a strong female character, 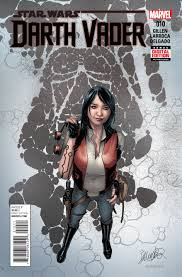 Vader & Inspector Thanoth are interrogating some aliens for information, Vader kills one of them before they can get the desired code for the aliens' safe, luckily the moustached and monocled Thanoth cracks the safe.  Vader offers him some praise and then tells him to carry on with more of the same or else! 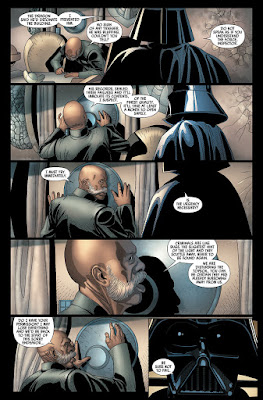 We then jump to Archeologist Aphra and the evil droids, who land on the now familiar planet of Naboo (The Phantom Menace) and attack the man who prepared Senator Amidala for burial.  Their aim is to gleam more info about the person who destroyed the first Death Star, after torture by one of the droids he reveals that Padme gave birth to a boy and the Jedi took him.  After his confession the droid kills Commodex Thane.
We end as Aphra reports the new revelations to Vader.

The Vader series story wise is a bit hit and miss for me, some bits tie in really well, like the background of Padmes' death whilst others are just throw away and seem to fill in the gaps, for example Aphra spills her guts about her childhood to a complete stranger, which just seems random!  Personally im not too keen on the stories that jump around to what different characters are doing.  On a more positive note the art is good and I am keen to see what happens in the next one as the story unravels. I like the story, just not the way its told.