San Andreas Blu-Ray Review - Is It The Return Of Classic Disaster Movies? 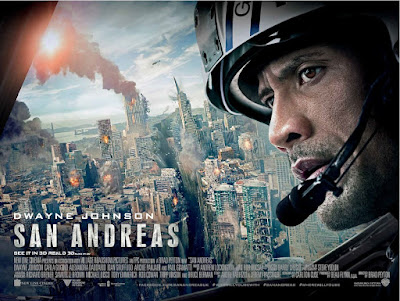 Making a disaster movie is risky.  If done well then you are treated to a film that will have scares, tension, feelings of care and relief.  A roller-coaster ride that generally allows you to turn your brain off and enjoy a movie where you, more or less know what's going to happen.  However, a disaster movie can be done badly.  Over saturation of poor CGI, poorly executed set pieces and characters that you really don't care if they get swallowed up in that sink hole are, unfortunately quite frequent these days thanks to movies being made for channels such as SyFy. 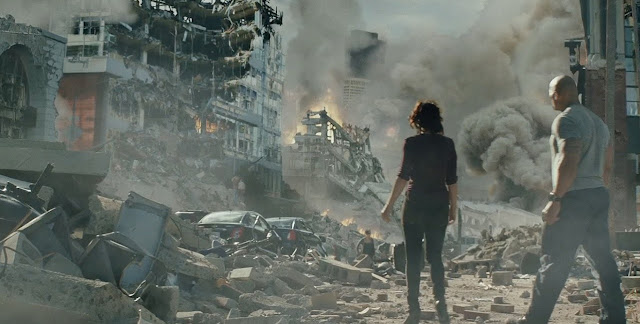 So a big budget disaster movie such as San Andreas has to impress and show how different it is from these low budget travesties.  I like a good disaster movie since I'm old enough to remember the classics of the 70's such as The Towering Inferno and Earthquake.  So I was happy when I was sent San Andreas on Blu-Ray to review.  I haven't seen a good disaster movie in years.  I'm glad to say I wasn't disappointed.  Yes it has a ton of CGI but, surprisingly, a host of practical effects including recreating a whole office block that sinks in water.

The plot, well let me sum it up in a few sentences.  There's a huge earthquake which happens along

the San Andreas fault line but magnifies when it gets to San Francisco.  A big one, 9.6 on the Richter Scale.  Dwayne Johnson plays Ray, a helicopter rescue pilot who has to save his (one remaining) daughter when she find herself stranded in San Francisco.  He and his ex-wife (Carla Gugino) join forces to go get her. While picking up his wife he finds Daniel (Ioan Gruffudd) who is now going out with his ex and of course he's a rich pen pusher who doesn't have the muscle and bravery of our hero.  He too manages to find himself in the middle of the quake.  You can imagine how he copes.  Paul Giamatti plays the concerned earthquake scientist who along with his partner discovers a way to predict earthquakes and warn the residents of the west coast that a second bigger quake is set to hit.

The movie's pace is wonderful.  The opening scene is a dramatic helicopter rescue from a car that is perilously dangling half way down a mountain face.  By the time we are 25 minutes into the movie we've also lost the Hoover Dam!  There are some wonderful set pieces in the movie, the best left to last where a Tsunami devastates what's left of San Francisco which has just more or less been flattened not by one but two massive earthquakes.

Johnson as well as the rest of the cast do a good job.  Of course they're not going to win any awards for their performances.  After all it's a disaster movie but at least you don't hate the characters and, myself at least wanted them to survive.  Some of the dialogue can be a little predictable and cheesy.  "Don't give up on me" is heard when Johnson's character thinks he's losing his daughter and did I see him tap a dial on the Helicopter when fuel was getting low?  I can easily put these to one side, I have to remember it is a popcorn disaster movie so I kind of expected it.  Although I will add that seeing Ioan Gruffudd as the bad guy for a change was a first.  I'm so used to seeing him as the hero or the smooth talking charmer.

The CGI is done well in the movie and even felt like there was a little throttling back on the effects.  Yes there are effects everywhere but the lack of the cheesy "lets shake the camera" to make it look like every thing's moving wasn't used in the movie...much.  Also as previously mentioned there are a lot of practical effects which you can find out how they were made on the extras accompanying the Blu-Ray.  As previously mentioned a full size office block was constructed and used in the largest water tank in Australia.  The block was lowered in the water so it gave the illusion the offices were sinking.  Impressive stuff.

San Andreas is a good disaster movie.  You can see where the extra budget has gone to work.  We need movies like this.  Yes there's room for a good period drama or a movie based on an important figure in history but we also need popcorn movies.  If you've had a hard day at work or school and just want to be entertained for two hours without much thinking then a movie such as San Andreas is perfect and it's done well.  The transfer to Blu-Ray looks gorgeous and the sound along with the impressive soundtrack sound amazing in Dolby Digital.  The rumble of the quakes are set to annoy your neighbours.

I certainly recommend San Andreas on Blu-Ray.  Sit back, grab your snacks, pour your favourite drink, disengage your brain for a couple of hours and enjoy a shakingly good movie.

Four out of Five.