PRELUDE TO POTERGEIST: THE 1972 TV-MOVIE SOMETHING EVIL 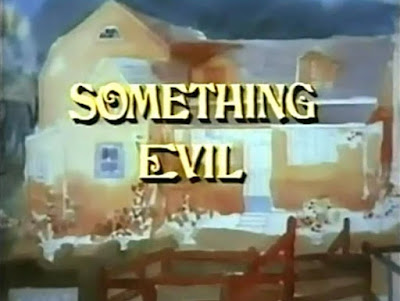 When listing his feature films, Steven Spielberg doesn’t begin with 1974’s The Sugarland Express, his first film to get a theatrical release in the U.S., he begins with the 1971 made-for-television thriller Duel. And yet between these two he projects he directed two other TV movies, which do not earn the same proud place on the bearded one’s self-defined filmography. It’s likely that this is in part because Duel received a European theatrical release, but there is also a likely second explanation: they aren’t quite in the same category. The other two films have never been made available on home video, but a few years ago, I was able to track down one of them.

Something Evil is a 1972 horror thriller that was Spielberg’s immediate follow up to Duel.  While not worthy of the same praise as its predecessor, Something Evil is nonetheless a fascinating viewing experience for the serious Spielberg fan, one which improved for me on a second viewing and still manages to suggest the very beginnings of the master Spielberg would eventually become. Duel is a fully realized film, a superbly crafted thriller which clearly demonstrates that its director would become a star. Something Evil is more a mass of potential. But what potential. The film not only sees early, unpolished examples of what would later become distinctive Spielbergian technique, but foreshadows some of the themes that would appear and reappear in his classic films:  children coming into contact with supernatural or other worldly forces, an absent or ineffectual father figure, and in the end, a depiction of the prototypical determined and resourceful Spielberg mother. 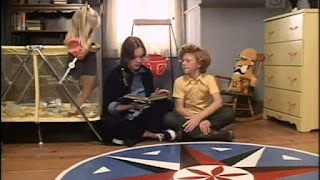 The story follows the Wordens, a family which has decided to leave their big city residence for a simpler life in the country (not unlike the Brodys in Jaws). Paul Worden (Darren McGavin) is a somewhat self-absorbed director of television commercials, and his wife Marjorie (Sandy Dennis) is an artist who we first see painting a picture of their new farmhouse. Their children, toddler Laurie and 10 year old Stevie (Johnny Whittaker of Family Affair and Sigmund and the Sea Monsters) seem to take immediately to the new surroundings, until one night when Marjorie, having gone out to the barn to check on a strange noise hears Stevie making strange whimpering noises and returns to comfort him.  Marjorie also discovers strange local superstitions, such as ritual chicken sacrifice for good luck (I’ll stick with knocking on wood) and pentacles (dream catcher-like amulets which are supposed to offer protection from evil). This is followed by mysterious (and in some cases deadly) happenings which begin to effect Marjorie, and then Stevie.

Multiple sequences in Something Evil bring to mind iconic moments in later Spielberg films: Marjorie’s trip to the barn is the first, bringing to mind Elliott slowly approaching the shed at night to find E.T. The sequence is eerie and unsettling, perhaps the best in the film. It demonstrates that the young filmmaker was already developing a strong sense of pacing and atmosphere. A sequence where a mysterious and frightening wind blows through Stevie’s room , causing toys and other objects to blow menacingly around the room, resembles the kidnapping of the children in Hook, as well as the sequence where young Barry is awakened by the toys and other electrical devices in his room turning on in Close Encounters of the Third Kind. But most of all, the film foreshadowed here is Spielberg’s haunted house classic Poltergeist. The 1982 horror masterpiece is a full realization of the earlier film’s concept of a child menaced by demonic forces and his/her mother’s struggle to save her child.  In some respects Something Evil plays almost like a first draft, with its thin story needing to be further developed, and both in style and content it leaves further evidence of Spielberg’s strong influence as producer (some claim director as well) of the film credited to director Tobe Hooper.

Both films center on families who experience strange paranormal disturbances, and in both cases the supernatural forces center their attentions on a particular child. Alfred Hitchcock once described the difference between his two versions of The Man Who Knew Too Much by saying that the first was the work of a talented amateur, and the second a seasoned professional. This applies equally well to Something Evil and Poltergeist. What we’re seeing here is an embryonic early iteration of Spielberg setting the stage for his and Hooper’s later triumph.

After all of the horror and suspense, perhaps the most Spielbergian element of is the positive and sentimental bent of the finale. “Some things are more powerful than pentacles,” neighbor Harry Lincoln (Ralph Bellamy) solemnly informs Marjorie.  The power of Marjorie’s devotion to Stevie allows her to overcome the evil forces. A mother’s determination and love is able to save her children, and nothing could be more Spielberian than that, even if the moment is not able to elicit the emotion that it would in Spielberg’s more mature works. 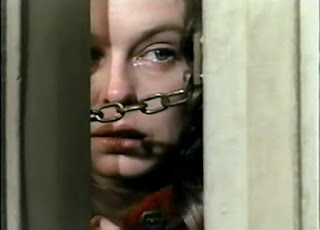 While the relatively low budget and short production schedule prevented Spielberg from employing the level of cinematic flourish we associate with him, he still shows signs of his visual mastery, primarily through inventive use of lenses and the placement of subjects on camera to alter point of view, and in the climactic sequence a quintessentially Spielbergian slow push-in on Stevie, with his hair blowing in the wind and glowing with a subtle halo of backlight, sets the tone for the many more sublime push in shots that would come throughout Spielberg’s career.  Unlike most television productions of its time, this one rarely shoots its subjects at eye level, opting most of the time for lower angles. There is also some inventive editing, particularly with the use of disorienting cuts in a second frightening wind sequence (which again brings thoughts of one of Elliott’s early encounters with E.T.)  Spielberg’s nemesis in this film seems to be the lack of time to set up sufficient dolly track: the camera movement here is far less smooth than it should be, and this was four years before the introduction of the Steadicam. Too often this leads to shots which are brilliantly conceived but imperfectly executed. At other brief times Spielberg tales advantage of this early use of “shakicam” to give us a visceral sense of being inside the action, as he would later do far more effectively in Saving Private Ryan.

One of the weaker aspects of the film is the performances: McGavin is polished as always, but he doesn’t have a lot to do, and Dennis is a bit stilted and forced in her delivery, which is drawback considering the film relies so heavily upon her. Whittaker is also underused and has too muted a presence in the story. We never feel the emotional attachment to Stevie to fear for him, nor do we sense anything demonic coming from him. Considering Spielberg’s legendary ability for director children, it’s a surprisingly flat character and performance.  As a matter of trivia, two cast members would work with Spielberg again: Carl Gottlieb, a co-writer of Jaws who also had a small role as an aide to the Mayor, has a cameo as one of Paul’s colleagues., and The Color Purple Oscar nominee Margaret Avery is briefly seen recording a song for one of Paul’s commercials.

All in all, Something Evil is no Duel, but it’s an intriguing early look at Steven Spielberg developing the bag of tricks that lead to his later classics, and a first look at the family dynamic which would be a hallmark of his films.  It’s a shame that it’s never been made available of home video to be seen his by his fans.

Paul Gibbs is a filmmaker, critic,  political activist and lifelong Spielberg fan who currently lives in Taylorsville, Utah. His reviews of current films can be found on Facebook at Double Feature Movie Reviews.  Find out more about the upcoming feature film "Trails End" at http://www.trailsendmovie.com