My Thoughts On Steven Spielberg's Bridge Of Spies by Bill Madia 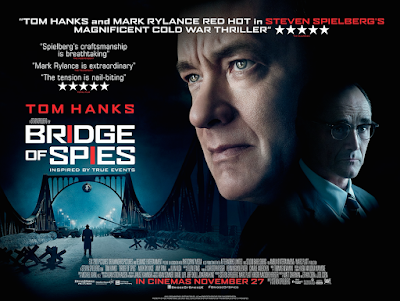 First of all, let me just say that, for me, 2015 is shaping up to be one of the best years for movies I have enjoyed since 1982!! And it looks like the great stuff is yet to come.

This leads me to Bridge of Spies, the latest from Steven Spielberg. This is the true story of the insurance claim attorney who defended a Soviet spy in America then negotiated the exchange of that spy for two Americans, one being a shot down U2 spy plane pilot in Russia and the other being an American student caught on the wrong side of Berlin when the wall went up. An espionage thriller, the film is a slow-burn. There is very little action yet you remain riveted to the screen as the story unfolds. Tom Hanks stars and he gives an amazing performance! As the only BIG star in the picture, he commands the screen from frame one. However, he is surrounded by a supporting cast that is absolutely flawless. There is not a single unconvincing performance in the entire movie.

After the 1,2,3 punch of Forrest Gump, Philadelphia and Apollo 13, for me, a lot of Mr. Hanks' roles gave me the feeling of, "Oh, that's Tom Hanks playing so and so." It wasn't until his amazing performance in Captain Phillips that I saw his as the character again and NOT the actor. And this film is the same way. You believe he IS this guy. You believe he IS negotiating this deal. And, like I said, you are on the edge of your seat for almost the entire picture! Perfectly directed, of course, beautifully photographed, superbly acted and tightly edited, this, surely will be a top contender in what is looking to be a CROWDED Oscar race this year.

Go see this film! An excellent depiction of an historical event and a GREAT time in the theater.

By the way, the musical score by Thomas Newman, filling in for John Williams, is spectacular in its subtlety. It doesn't overpower yet effectively accompanies the suspense on the screen. Very well done!