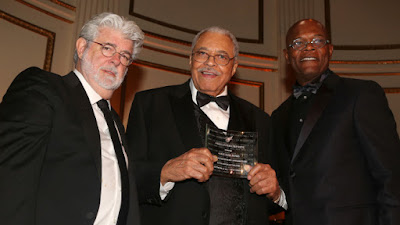 James Earl Jones was honoured on Monday at the American Theatre Wing Gala which took place at New York City’s Plaza Hotel.  To mark the occasion, George Lucas and Samuel L. Jackson took to the stage to endorse the honouring of man who provided the voice of Darth Vader.

“I knew the voice had to be very, very special,” Lucas said. “It was a tough choice, but in the end, it was a really easy choice. It was really a choice between Orson Welles and James Earl Jones. James Earl Jones won hands down. He created, with very little dialogue, one of the greatest villains that ever lived.”

Jackson presented Jones with an award for his “extraordinary contribution to the American theater,” adding in a little tribute of his own: a sterling silver money clip.

“There is no money in this clip,” he joked. “But way back when, these were the first Tony Awards and this is a representative of those awards.

“Thank you for giving us the courage to attack a role, and not simply enter it,” Jackson said