Film & Comic Con Cardiff took place at the Motorpoint Arena on the 24th and 25th October in the Welsh capital of Cardiff.  The event, run by Showmasters always proves popular with the locals and fans from all over the country.  The guest line up was headlined by Carl Weathers from the Rocky films and also late announcement that peaked my interest, Margot Kidder who played Lois Lane in the Superman movies of the 70's and 80's.  Both were on my list of autographs I just had to get on Saturday. 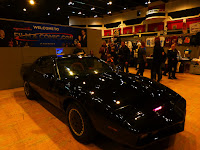 Arriving just after 9am we headed into the massive arena and were greeted by a talking Kitt car from the classic 80's TV series, Knightrider.  After taking a photo (which was harder than we thought.  The owner was constantly cleaning Kitt, and to be honest who wouldn't?) we headed towards the stalls.  My mission was to get my hands on the Jaws Reaction figures.  A quick glance across at the stalls and I had a feeling these were going to prove illusive.

Our first objective was to get our photo taken with a velociraptor and in front of a green screen.  The Jurassic Park gates would be added in to your photo.  The group of friends I was with were all in the picture and the photographer was really good in moving us around.  A bargain too at only £5. 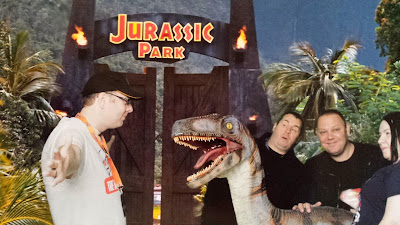 At the back of the arena is where most of the guests were located.  We grabbed a virtual ticket for Carl Weathers.  We were number 51.  This was a great system.  There's a board and they write a number range and if your ticket is in that range you can queue up.  It prevents long queues allowing you to go off and do something else without too much time wasted in dreaded queues.  We estimated that 45 minutes would do it for us and come back then.  Some guests were still missing but Joe Flanigan from Stargate Atlantis was there.  No queue either.  A bonus!  We headed up to the guest who I will be honest looked like he had just woken up.  I put it down to jet lag.  He signed a 10x8 but wasn't very talkative.  Definitely in need of some caffeine I think.

Next we noticed that Superman's Margot Kidder was there.  We asked the Showmasters staff if we could get a ticket and she said go straight up.  Still no queues.  Amazing!  Margot was lovely and wanted to know if we spoke Welsh and where we were from.  She looked genuinely thrilled to be there.  Two down on our list and we'd only been in for half an hour.  Actually make that three as we also got Mark Rolston while we were there.  He was in Shawshank Redemption and a lot of Star Trek.  He explained the make up process when he was on Deep Space Nine as a Klingon.  An interesting chat. 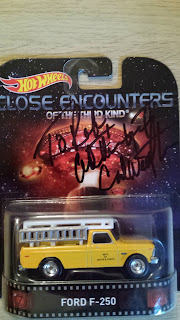 At this point we decided to go and have a look at the stalls and my mission to get my hands on those Jaws figures.  I was also looking for anything Lucas and Spielberg related....Obviously.  There were plenty of stalls to browse and plenty of quality merchandise.  Reaction figures were in abundance but no Jaws.  There was plenty of Gremlins, Alien, Back to the Future and more were on sale but none from the Spielberg classic.  Never mind, I did manage to find a Jaws bottle opener, Labyrinth press kit and an Amity newspaper mock up poster.

Heading back over to the autograph area we checked the Carl Weathers line to see if we could get in the queue.  We were in.  Carl Weathers was actually in Close Encounters of the Third Kind but unfortunately his scene was deleted.  However you can watch the scene on the Blu-Ray.  My plan was to get him to sign my Hot Wheels Close Encounters van and hoping he would mention something about his time on the set.  Unfortunately he looked confused and couldn't remember being in the film.  I found it amazing that he couldn't remember working on a Spielberg classic along side Richard Dreyfuss.  Oh well.  He signed it for me anyway.

One thing you can always rely on with a Showmasters event are there will always be plenty of talks.  We headed up to the next floor where Margot Kidder was about to give a talk. She was really interesting and wished the talk had been longer.

While there one of my friends from our group informed me that Rene Auberjonois will draw a bucket for you and sign it for his charity, Doctors Without Borders.  A worthy cause.  It only costs £10 and he'll tweet a picture of you holding the drawing.  I had to have that to go with my Deep Space Nine autograph collection.  I already had his autograph in my collection but this had to be done and it was for charity too.  It turns out we were the first ones to ask for this and he was delighted to do it.  Here's his tweet:

Sat next to Rene was Nana Visitor and I just had to ask if I could get a photo of the two of them together, just like in the show.  They were happy to oblige: 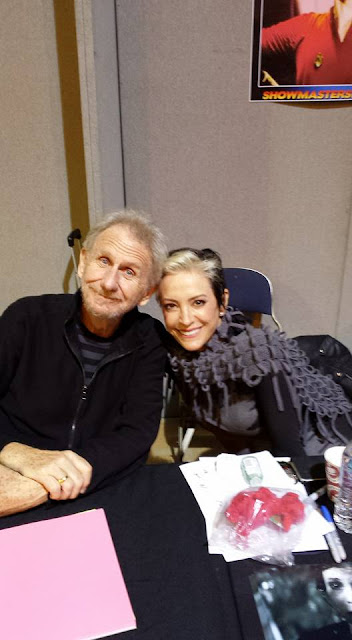 I decided to have another look around the stalls but not before stopping for a bite to eat.  Normally the food inside these venues are overpriced and a bit tasteless. I ordered a bacon and sausage bap and although the wait was a little long it was worth it.  Very tasty and only £3.25.  Refuelled I set off on my quest to find these Jaws figures.  I headed to some stalls I haven't looked at yet and there they were!  Well some of them.  I was hoping to get my hands on Hooper, Quint and Brody from Jaws but one of the stalls had Hooper and Brody.  I snapped them up.  At least I got my hands on a few of the figures I was after.

Another autograph later, (Nicki Clyne from Battlestar) I headed upstairs to the cosplay area.  Here a few comic book illustrators and sellers were set up.  One grabbed my attention.  Raiders of the Lost Arse.  Yes it was a parody of the Spielberg movie and I had to have it.  There were plenty of cosplayers on this floor all ready to hit the main floor.  a great place to grab some photos.

Our day was coming to an end but we had one more talk to attend.  A Star Trek talk with Rene Auberjonois who played Odo and Nana Visitor who played Kira Nerys in Deep Space Nine.  The talk was really informative and interesting but was, unfortunately interrupted a few times by public announcements.

That was my day all wrapped up.  One final look around the stalls and with no money left in my wallet I called it a day.  I will say this was the best comic con I've been too in regards to crowd control.  Showmasters seemed to be controlling the amount of people allowed in at any one time and at no time did I feel the place was overcrowded.  Even by mid Saturday afternoon I was still able to get to the stalls which normally is an ordeal for a comic con.  The Showmasters staff were helpful as always and informative when asking them a question.

Here's a floor walk of the event: