There is 4 comics to review! Why Marvel cant spread them out is beyond me, but I will split them in half and do 2 here and 2 in the next review!

This story arc is part of the group of media that is titled 'Journey To The Force Awakens', in the run up to the movie release. 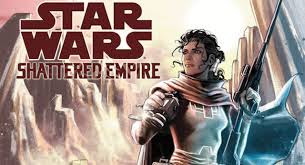 A mysterious red cloaked figure is talking to an Imperial Captain on the bridge of a Star Destroyer somewhere in the Outer Rim.  The messenger conveys a message from The Emperor.

On another Planet just after The Battle of Endor the Imperial war machine is still wreaking havoc, trying to stop it in its tracks is a small band of Rebels in A-Wing fighters, whom after back up arrives, get the upper hand and destroy an AT-AT walker in the process and safely return to base. 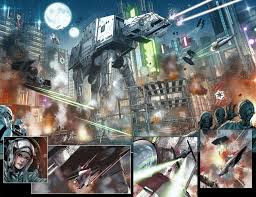 The Rebel fleet is assembling in space and their leader Mon Mothma is briefing Princess Leia on a mission she must attempt.  The main character of the story 'Shara Bey' is assigned as Leia's pilot on the mission, which leads them to the planet of Naboo where they meet with The Queen of the planet and have diplomatic talks about Naboo joining the Alliance.
Whilst in talks a soldier frantically notifies them of a communications black out which signifys trouble....a storm starts! In orbit above Naboo, Imperial ships have arrived and are releasing array dishes to create storms and destroy Naboo!

Im liking this so far, especially as its covering a 'newer' aspect and bridging the gap between the films.  The art is brilliant, the cover is awesome and some of the Leia panels look like photos! The story so far is great, my personal favourites being the battle in a city and Leia being on Naboo is quite poignant. There is a strong female cast in the comic which is a great thing moving forward!
More of the same please Marvel! 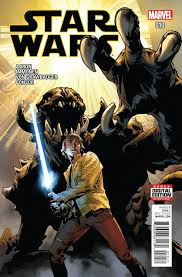 We join the un-comfortable situation that is Leia, Han and Han's wife stuck in Sanas' ship together, being chased by a Star Destroyer, they escape by jumping to lightspeed.

The Millennium Falcon has arrived on the smuggler moon of Nar Shadda with the unlikely duo of Chewbacca and C3PO on-board on a quest to rescue Luke Skywalker.
They begin searching for Luke, with C3PO fumbling his way through the process and annoying the locals, luckily Chewie is there to save his circuits and starts throwing droids, aliens and droids around!

Meanwhile Lukes captor, who looks like he should be in Assassins Creed challenges Luke to a lightsaber duel and kicks lukes butt!  In a scene reminisent of the Jabba's Rancor and the arena battle in Attack Of The Clones, Lukes attacker and the Hutt that captured him decide he should be killed by a monster.

Back in space on Sana Solo's ship, she is doing her best to wind Leia up and make trouble for Han by reminding them both repeatedly that she is married to Han.  Leia receives a message from the Rebel Fleet that Luke is in trouble, they change course to go help him.

Whilst on their quest to find Luke, Chewie and C3PO are spotted by a Gungan with an eyepatch who tells Dengar the Bounty Hunter where they are so that he may collect the bounty placed on Chewies head by Jabba The Hutt.

The highlights of this comic for me were the 'Gungan with eye patch' appearance, which is sure to annoy some and I also liked the relationship dynamic between Chewie and Golden Rod.
The whole is she/isnt she Han's wife is wearing a bit thin now and the back biting between the three of the characters is also tedious in my opinion.  It would be interesting to see more of the Hutt's Assassin Creed Looking Side-Kick to see what his story is.