Lets kick off with everyones favouite walking carpet Chewbacca and his very own adventure! 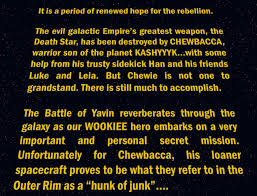 A girl and her dad have been put to work in a mine filled with what looks like candy floss to pay off a debt to a weird looking alien type debt collector with a goldfish bowl for a helmet.  The dad smuggles his daughter out Indiana Jones style in a mine car! 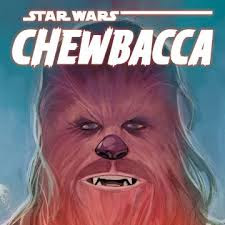 We cut to Chewie who by the looks of it has crash landed his ship and jumped into some flowers to have a nap?! Chewie goes into town to try and get a new ship part and he bumps into the girl who it seems nobody likes and various weird aliens just want to sell her out and chase her into a run down casino!
The Wookie goes gambling to raise money for his ship parts and finds the girl hiding in the gambling establishment and lo and behold they start becoming friends. Even though she cant understand a word he says she asks Chewie for help in breaking her dad out from the mine and he agrees! 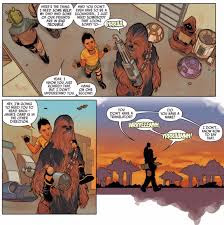 And then the debt collector guy and his cronies meet an imperial officer and some Stormtroopers' somewhere out of town and sell them some dodgy stuff in order to gain favour with The Empire. And that in a nutshell is about it!

I don't know what I was expecting from this, but the story seemed a little flat and predictable in places, most of the panels were filled with the girl rambling on and Aliens chasing her around town.  It just seemed a bit too predictable, hopefully the story will get better when the Empire sticks its inevitable oar in. But Chewie laying in flowers?! Seriously, this made no sense at all? The art was good except the girl keeps looking more and more like a boy with every panel. I'm still looking forward to the next one though.