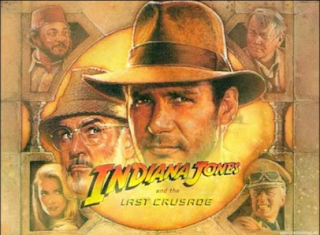 Gaetano Malaponti posted this wonderful MIDI rendition of the finale and end credits from Indiana Jones and the Last Crusade.  I think Gaetano did a fantastic job and here's what he had to say about the rendition along with the video at the bottom for you to enjoy.

About a month ago I was fortunate enough to bid on and win the orchestral score "Indiana Jones and the Last Crusade: Finale and End Credits". With the desire to try and improve my own compositional and orchestration skills, while studying the music, I decided to also have a go at doing a midi reconstruction of the whole score. That's 23 instruments playing for 378 bars at 44 pages length. So for a few hours a day, I started the daunting task of playing each and every instrument on my digital piano and while recording the results into a midi file on my computer. A week later (after about 20 hours of note playing) the whole piece had been recorded, apart from a few instruments here and there that I could put in at a later date. I took this midi file and then transferred it to my other computer which stores all my sample library. My main library, Miroslav Philharmonik, although one of the cheapest around, does decent renderings of orchestral midi files and I'm quite happy with it. In this library, each instrument is panned to its correct orchestral position which means it is almost ready to go, bar using a few filters.

So, for the next week, I tweaked and corrected notes, worked with filters and controllers and basically tried to make this midi sound as orchestrally authentic as possible. There were problems throughout the process though. I had latency issues with the original recording; while using the samples, some notes doubled their values when the tempo became slower; there were weird modulatory effect sounds on the woodwind (even though I wasn't using any modulation); the audio was sounding different to the original project, after bouncing it down to a wav file etc etc...the list goes on. Basically, all the usual problems often faced when working with midi and samples happened here.

So here is the final warts and all version (or at least the version where I have done the best that I can over a two week period and basically, have had enough and left it as it is). In the end, I had to combine 4 separate projects into the completed version and there are still several issues on display...a few notes holding through when they shouldn't, a different balance of instruments and even a couple of moments where the oboe and english horn just disappeared altogether during the bouncedown of the audio (even though they play fine in the original midi and even though I ended up actually recording the playback live to try and remove the dropouts..which worked to an extent...but not 100%)

Regarding the music, my admiration for John Williams, which was high before, has gone up tenfold after doing this project. The wealth of musical ideas that are on display here and just the sheer amount of work that has gone into this composition is unbelievable (you don't really consciously hear half the instruments while listening because they blend in, but they are there, doing their awesome job).

Finally, while listening to this midi reconstruction, you might hear a slight incorrect phrase here, or a slight dropout here, or a slight dissonant clash here (where the note has held on even though it is written short) or the balance might not sound quite right during that part or this part, or it just doesn't sound like the original etc etc and you might find the need to make a comment of some sort. Before you do though, please bear this in mind first...that one note that you noticed in your relaxed listening state, might be the 10,000th note that I had played and maybe missed (or just left, out of sheer exhaustion) the finer details of.

Now where's the London Symphony orchestra when you need them?