Book Review -- Star Wars FAQ: Everything Left to Know About the Trilogy That Changed the Movies 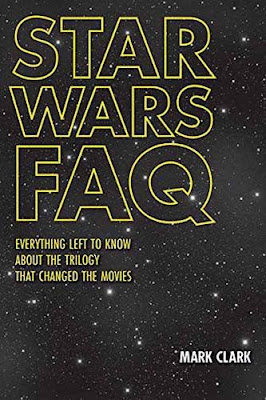 This review is for Star Wars FAQ: Everything Left to Know About the Trilogy That Changed the Movies by Mark Clark

If you are any sort of Star Wars fan, Star Wars FAQ was written for you. Long-time fans (such as myself) will appreciate the history, trivia, and anecdotes presented — regardless if they feel familiar or not — and the newer generation of fans will find a treasure trove of all things related to that galaxy far, far away.

After an introduction explaining the purpose and design behind the book, Star Wars FAQ offers a brief history of Hollywood and how Star Wars forever changed the landscape. It then movies into a biography of George Lucas and moves through highlights of his early film work. It is interesting to see how everything led up to Lucas creating Star Wars. His influences — from the movies he watched to the books he read — are essential. There is an entire chapter devoted to expounding upon those influences and the role they played in developing the fantastic world we hold dear.

The narrative then moves on to the process of writing the screenplay for Star Wars, and to actually getting the whole project off the ground. Pieces most definitely needed to fall into place and, fortunately for us, the right ones fell at the right time. From casting and concept art, to the musical score and the unwavering support of 20th Century Fox studio head Alan Ladd, Jr. — Star Wars FAQ covers it all.

It also unveils what a bear Star Wars was to film! Reading everything that went wrong during filming (and not only on the original Star Wars, but The Empire Strikes Back, and Return of the Jedi as well), one who didn’t know better might be flabbergasted that anything made it to the big screen. Moviemaking looks fun, but personality conflicts, egos, production delays, budget woes, disasters, and malfunctions all add up to an intense level of stress.

After the production of each movie in the trilogy is discussed, the chapters that immediately follow deal with the impact of that film, from box office returns to critical and fan reaction. That said, one of the great strengths of this book is it doesn’t need to be read in a linear fashion. There are so many topics to choose from — actor and crew biographies, books, comics, toys, gaming, bloopers and continuity errors, quotes and misquotes, homages and parodies, awards, etc. — jumping your way through the book to what interests you personally takes nothing away from the experience. While reading the text, when a certain topic is raised, you will be referred parenthetically to the chapter where that subject is discussed in full. I found that very helpful, along with the thorough index and extensive bibliography.

Two chapters stood out to me in particular. One is dedicated to the infamous Star Wars Holiday Special (Yes, it gets a whole chapter!). I’ll admit, the Holiday Special holds a certain appeal — exactly what that is, I’m not sure. However, I enjoyed the author’s recounting of his experience watching the special on CBS during its initial airing (an experience we share, being around the same age). The other covers the involvement of John Williams. Lucas has said that the score for Star Wars was the only thing that exceeded his expectations, and few fans would argue with that assessment. Quibbles over flaws in the films happen all the time, but no one ever questions the impeccable quality of the musical score.

One of my favorite selections from the book? Pages 123-124. If you were a kid in the post-Star Wars 1970s, you’ll find yourself grinning ear-to-ear. Good times, great memories.

Star Wars FAQ is an easy, fun read. Author Mark Clark has an engaging writing style, and he clearly loves the subject matter. (One minor issue - Kashyyyk appears on-screen in Revenge of the Sith, not Attack of the Clones.)

One thing I’ve learned since 1977 — you can ever know too much about Star Wars, and there will always be something you don’t know. I’m constantly (and pleasantly) surprised when I run across a fact or image that is new to me, and Star Wars FAQ did not disappoint on this count. Highly recommended!

Thank you to Applause Theater & Cinema Books for providing a copy for review.