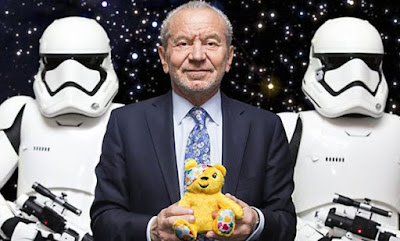 Every year here in the UK BBC devote a whole evening to fundraising for Children In Need.  It's become a popular event and big stars are always willing to help beat last year's total which is always in the tens of millions.

Lucasfilm and Disney are getting on board to help by teaming up with the BBC for a one-off special to air on the night.  Generally we get a Doctor Who special but it seems this year Star Wars is the flavour of the night.

Return of the Jedi's Warwick Davis will be performing in the sketch along with R2-D2 and C3PO.  Davis took to Twitter to tweet his delight in being involved:


Really excited about this and thrilled to be involved for @BBCCiN. #StarWars https://t.co/RDp0EbT9qJ
— Warwick Davis (@WarwickADavis) October 28, 2015

The sketch will also feature some famous faces including The Stig from Top Gear and Lord Alan Sugar.

Tune into the BBC Children in Need Appeal show on Friday 13th November on BBC One from 7.30pm