Scaling Back Museum Of Narrative Arts Not Enough For 'Friends of the Park.' Car Parks Preferred Over Museum And Park 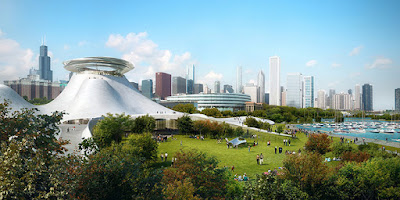 The saga over George Lucas's museum vision is perhaps going into the third act with what could be a compromise.  A revised plan would see the museum being "scaled-back" in the hope that it would satisfy a non-profit group that filed a complaint.

The complaint consisted of concerns that the original plans would see the museum being built south of Soldier Field in the Chicago Park District.  The 'Friends of the Park' group argue that the city has no authority to hand over the land, based on a legal principle known as the public trust doctrine.  That doctrine makes the state a trustee over natural resources and requires it to ensure open spaces are preserved and accessible to the public.  Sounds fair but currently the area is occupied by...two car parks.

So a new agreement is in place which would see the proposed museum's plans go from 400,000 square feet to approx 300,000 square feet.  The museum would see it include a parkland which would be accessible to the public.  However this doesn't seem to be the end of the complaint from the group who it seems really love their car parks.

U.S. District Judge John Darrah told Friends of the Parks that, "in my judgment, you don't have a viable complaint." He gave the group three weeks to fine-tune their complaint against the project.

However, the group's attorney, Sean Morales-Doyle, said the complaint would largely remain unchanged.

"We see our lawsuit from the beginning as not being about the specifics of the document, but whether or not it's OK for the city and park district to sell public land to a private entity like the Lucas museum," Morales-Doyle said.

So it seems the complaint has changed from providing open space and access to the public to 'a right to sell.'  My question is how did those car parks get built in the first place?