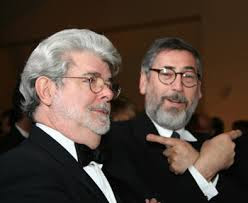 John Landis was in attendance last night at the 25th annual Halloween Horror Nights at Universal Orlando.  He was the unlikely bringer of Star Wars news that a lot of fans have been hoping to hear for a long time.  During a Q&A with Empire magazine, the director reportedly dropped a bombshell and said the original theatrical cuts of the original Star Wars trilogy are being released by Disney.

Empire is reporting: "At a Q&A tonight John Landis dropped that Disney are finally going to re-release the theatrical cuts of the original Star Wars trilogy." Landis then added, the information was provided to him by his old pal George Lucas.

Check out the tweets below.


Personal view: I hope, if they do bring out the movies then they are not remastered in anyway.  No 7.1 sound, no 1080p.  Just the original films.  After all fans don't like the changes that have been made to Star Wars so why should they get this too?  As you can tell I don't get all the toetapping over the unrelease of the original trilogy.  Just my view of course - Rob