By Unknown September 13, 2015
Back in May of 2004 Dark Horse released its 19th issue of Star Wars Tales. In particular, this issue included a short piece called Into the Great Unknown. This little comic was notable as it was the first officially licensed work to include both Han Solo and Indiana Jones.*

In the issue you follow Han and Chewbacca as they blindly jump into hyperspace and end up in our solar system. Read more here to find out the rest! 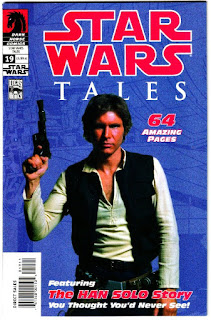