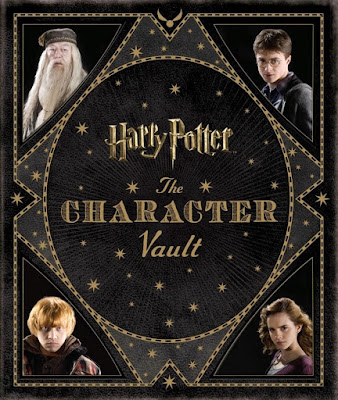 I was a late comer to the world of 'Harry Potter.'  Only last year did I actually get around to catching up on the movies.  But I loved them.  So much so that I decided to start reading the books.  I thought I would read 'Harry Potter and the Philosopher's Stone' and see what all the fuss was about.  Well I couldn't put it down and was amazed at how well written it is.  J.K. Rowling, lets be honest, is a talented writer.  She brings so much atmosphere to each scene and builds a world that you genuinely don't want to leave.

I know it's been said so many times when it comes to films versus books, but in the case of Harry Potter I genuinely think you should read the books.  They are so much better.  As good as the films were, the books bring a whole different dimension with so many extra scenes.

However, because Rowling builds this whole world around you, inevitably there's a whole cast of characters, each one important to the story that lives in the Harry Potter world.  Some characters you may meet in one book for a fleeting visit but then not meet again until two books later.  You see Rowling has this whole story mapped out, and mentioning a character early on will, most of the time, be important to a story arc that may not materialise for another book or two.

The down side with this I found, is I may have forgotten who that character was and their importance.  When Titan Books contacted me to ask if I would be interested in 'Harry Potter: The Character Vault' to read and review I jumped at the chance.  It sounded like the perfect book to have along side me as I'm currently reading 'Harry Potter and the Order of the Phoenix' which already, despite me being only twenty percent of the way through the book, has a huge character count.

The chapters are sorted into Hogwarts students, staff, The Order, Dark Forces, Ministry of Magic, Families and more.  It's well laid out, logical and easy to find the character you want information on.  The book is full of quality photos and the addition of a few pull outs such as two posters at the back, one for The Order of The Phoenix and the other for Death Eaters just adds to the love that has gone into this book.

Author, Jody Revenson is no stranger to Harry Potter books, bringing 'Harry Potter: The Creature Vault' and 'Harry Potter: Magical Places From The Films' which have been previous fan favourites.  This book continues that quality trend and is an essential addition to any Potter fan or, like me, those who may need it by their side as a reference book while reading the novels.

Highly recommended and a nice way to kick off your Christmas shopping.  This magical title from Titan Books is out now.  £16.99 on Amazon UK.  The book hits the US, October 27th and is on Amazon at $25.26.