By Unknown September 08, 2015
Happy Force Friday!!!
Okay, so it is actually four days later and Tuesday now. But, really, Force Friday began Wednesday with the 18 hour unboxing live stream. That was the beginning of a whirlwind of weekend that was equal parts fun and exhausting.
To begin with, I had been a little under the weather during the front part of the week. Short of death, nothing was going to keep me from participating in Force Friday. The tide of my sickness began to turn just in time for the live unboxing stream. What initially sounded a bit unnecessary to me ended up becoming something I thoroughly enjoyed. The real stand outs from the event, for me, being Poe’s black X-Wing, Sphero’s BB-8, and the Millennium Falcon quadcopter but more about that later. The fervor that grew with each hour of the stream (I did sleep for some of them but they showed recaps) was a great lead up to Friday. Grade A job from the marketing people there. Andi Gutierrez and Anthony Carboni were troopers and stayed awake through all 18 hours hosting. Major props there as I’m fairly sure I would have died, sick or not.
When Thursday finally came around I was as giddy as a kid waiting for Christmas (or just myself waiting for Christmas, truth be told.) We decided to head to Toys’r’us when they closed at 9 to scope out the situation. Equipped with water, iPads, and a wallet preparing to become [considerably] lighter, we were ready. We were greeted by two small groups in front of us (four people in total) already forming the line. The humidity made it pretty awful but we powered through. We all struck up a conversation that would last until they opened the doors at midnight. We found no need for our iPads. Linnea, who was dragged along with me, told our roommate Josh via text that “these are her people” and it is true. It was nice to immerse myself with people who had the same kind of passion that I normally dealt with on my own. While I’m so grateful to Linnea for going with me, it was nice to compare notes with fellow fanatics. The awesome folks that were first in line have a Facebook group that I gladly joined and am enjoying posting in.
In comparison to them, I felt like a bit of an amateur. They were headed in with the intention of getting one of everything, ultimate collectors. I could only tip my cap. I’m not as much of the collector type. I like to open my toys and enjoy them. But I have complete and total respect for those who do collect, it takes an extreme amount of time, money, and determination. I couldn’t help but be a little envious. 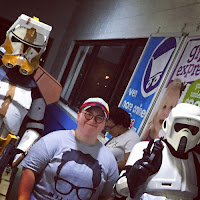 Some members of 501st showed up. They were a hit and spent some time talking with us about how they built their suits.  As time crept nearer Linnea and I discussed what I wanted most and a budget (one we’d both blow through and then some.) After a Starbucks run and two large bottles of water were crushed, the time grew closer to midnight. When doors finally opened we snagged our free poster – an excellent Kylo Ren poster, and free Lego brick featuring a first order stormtrooper. We headed for the huge Star Wars aisle that would have been three under normal circumstances. My excitement level was through the roof really. I quickly grabbed Finn and Poe figurines. Linnea grabbed an Artoo lunch box and the Funko BB-8. The latter garnered some attention as it was the last one and we even had someone try to barter for it. I was slightly disappointed to find that they had none of the large Poe Dameron black X-Wing so Linnea suggested selflessly that we go to Target as well. She’s truly the best, considering she had to be up in six hours at this point. 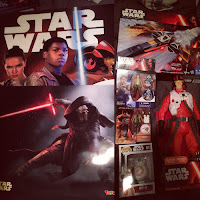 Target was a total success. Not only did they have Poe’s X-Wing with the figurine but I also picked up a giant 18 inch of, as Oscar Isaac said, “the best damn pilot in the galaxy.” We left Target on cloud 9. I was so glad to share the evening with her and have a blast. Passions are the best when shared with the ones you love. A Star Wars Rebels marathon on Disney XD was the perfect way to drift off to sleep that night. 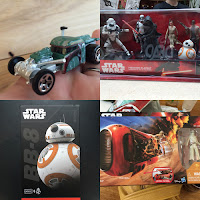 At the time, I thought this was essentially the end of our mission. Hardly. The worst thing for our bank account that happened was the pre-planned trip to Orlando with my family. The first day there we tried the Super Target where I picked up Rey on her Speeder, a First Order Stormtrooper coffee mug, Linnea got a cute BB-8 shirt, and I bought my nephew a Boba Fett hot wheels car that he clutched all weekend. 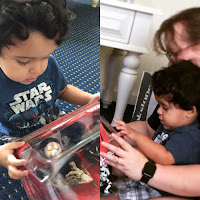 From there, we went to the Florida Mall. This was also a mistake for our financial responsibility. I bought a set of figurines from the Disney Store. Even though they were just six little figurines for a modest $15, it ended up being one of my best investments. After all of the shopping, back at the condo, I sat on the floor and unboxed them with Luke watching me closely. Sharing this time with him, the same kind of moments I had with my dad during the prequels when I was young, was not lost on me. It is something that means a great deal to me.

I happened upon the ultimate prize of the weekend at Brookestone: the Sphero BB-8. Being championed by many as the best Star Wars toy of all time, this item is already selling out everywhere. Some have compared its predicted future Christmas sales performance to huge hits of the past such as furbee or tickle me Elmo. The sales woman at Brookstone said she thinks it is going to be a real life version of the 1996 movie Jingle All the Way. Linnea promised to get me one for Christmas but as soon as they started to sell out everywhere we decided to jump the gun. Let me tell you, I do not regret it. The thing is as cool, if not cooler, than I could’ve imagined. My cats enjoy chasing it around too.

At the end of it all, I know that I’m really grateful to have Luke and Linnea. She puts up with my crazy obsessions and passions. If anything, she encourages them. Lukey approaches the Star Wars universe with an innocence I forgot that I once possessed. That’s all you can ask for in life. 100 days until the Force Awakens and I can’t wait.


Kaitlyn Mason  is an aspiring writer who is finishing work on her first novel. Beyond writing fiction, she loves to write essays and blog posts on wide spread cultural topics. The films of Steven Spielberg and George Lucas have had an immense impact on her life and ambitions. She hopes to bring a critical and enthusiastic approach to her contributions on thebeardedtrio.com.  When she isn't writing she enjoys watching baseball and reading. Kaitlyn can be found on her blog (mostlikelytobe.wordpress.com), twitter (twitter.com/kaityballgame), and medium pages (https://medium.com/@kaityballgame). Feel free to say hello.