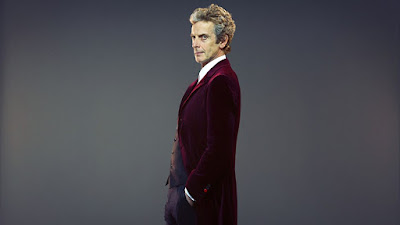 Only a few days to go before the series nine premiere of Doctor Who, and now we've got a full listing of all the titles for the 12 upcoming episodes. Check out the handy graphic below: 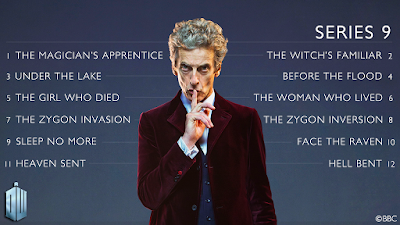 Here's a bit more info about each episode from http://www.bbc.co.uk/blogs/doctorwho/:

Episodes 1 and 2: The Magician’s Apprentice / The Witch’s Familiar

Where is the Doctor? When the skies of Earth are frozen by a mysterious alien force, Clara needs her friend. But where is the Doctor, and what is he hiding from? As past deeds come back to haunt him, old enemies will come face-to-face, and for the Doctor and Clara survival seems impossible…

Episodes 3 and 4: Under the Lake/Before the Flood

Toby Whithouse has written some of the show’s most memorable episodes including School Reunion, The Vampires of Venice and The God Complex but his first two-parter may be his most chilling story to date. Steven Moffat called it ‘brilliantly creepy… one of our scariest adventures yet!’

Episode 5: The Girl Who Died

Maisie Williams is best-known for playing Arya Stark in Game of Thrones and is a three-time Screen Actors Guild Awards nominee. On her first day on set she told us, ‘I'm so excited to be working on Doctor Who as it’s such a big and important part of British culture.’ But who is she playing in Doctor Who?

Episode 6: The Woman Who Lived

Although we know very little about Sam Swift, we’re hoping that Rufus didn’t shave off this magnificent beard when it came to the shoot! He was delighted to appear in the show, admitting he was ‘pretty ruddy happy’ moments after the read-through for his episode.

Ingrid Oliver returns as Osgood? Hurrah! Wait a minute… Wasn’t she killed by Missy in Death in Heaven? Even Ingrid had been fooled… ‘I was so sure Osgood was a goner after the last series!’ she revealed, ‘As every actor who’s worked on Doctor Who will tell you, there’s always the secret hope you'll get the call asking you to come back. To actually receive that call is both unexpected and brilliant. The word ‘honour’ gets banded about a lot, but it really is, it’s an honour.’

It’s written by Mark Gatiss, a Doctor Who veteran of whose previous work include The Unquiet Dead, The Idiot’s Lantern, Victory of the Daleks, Night Terrors, Cold War, The Crimson Horror and Robot of Sherwood. He revealed the episode had ‘been brewing in the dark recesses of my mind for a while now!’ adding, ‘I’m also chuffed to bits to finally welcome my old friend Reece Shearsmith onto the show. He’s been badgering me for ten years!’ Mark (pictured below with Reece) has also featured in a number of stories, most notably The Lazarus Experiment in 2007.

The episode sees the return of Joivan Wade as Rigsy, the young graffiti artist who helped save the world in Flatline. After finishing filming for the episode, Joivan tweeted, ‘And that’s a Wrap! On @bbcdoctorwho episode 10! I've had an amazing time! Can't wait for the series!’

Details for the big finale are sparse at the moment and although writer Steven Moffat has promised us a very special cliff-hanger for episode 11, he wouldn’t be drawn on any plot points.

We know that Rachel Talalay, who helmed last year’s Dark Water/Death in Heaven, is back in the director’s chair. ‘These episodes are completely different to what I did last year…’ she told us. ‘Episode 11 is one of the most complicated and different episodes I’ve ever done… It just has my head in spaghetti!’

Of course, as previously announced, the Christmas special features the return of Alex Kingston as River Song.

Don't miss the return of the Doctor this Saturday, September19! If you haven't seen the prologue to series nine, you can watch it right here.