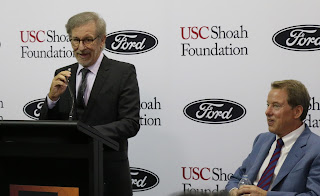 The executive chairman of Ford Motor Co. Bill Ford announced at an event yesterday that his company will continue to sponsor Steven Spielberg's Shoah Foundation. IWitness Program.  Steven Spielberg was in attendance and said:

"My dream through the Shoah Foundation is to someday have programs like IWitness become prerequisites for graduating high school...For tolerance education to be folded into the social science study program in public high schools and private schools around the nation, and around the world — that is my ultimate goal."

The Shoah Foundation runs IWitness, an educational website that provides access to more than 1,500 full life histories and testimonies of survivors and witnesses of genocides. Ford Motor Co.'s $180,000 gift will help expand IWitness to more schools in the Detroit area.

Ford addressed the group saying, "I feel that any corporation's role in the world is to try and make people's lives better."