Behind the Magic: John Williams and Music Theory 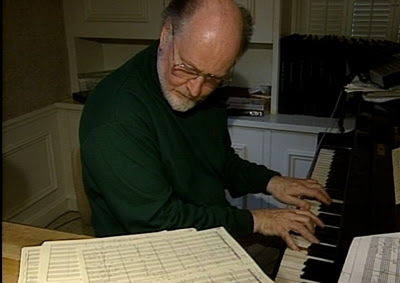 Having been learning music theory with a view to composing, I get a real kick out of taking the concepts I've encountered and linking them back to my favourite scores by John Williams.

So, here's a look at a few (fairly basic) musical ideas under the hood of some of the scores we all love.

Some of Williams's most memorable themes are his romantic ones -- themes written to underscore a cinematic love affair, or a character who represents a film's romantic quality. Three of the best-loved such themes share something in common--a major sixth interval.

For a quick primer on intervals, here's a scale (of D major, as I'll be using that for examples below).


And now here's the first line of "Han Solo and the Princess" from The Empire Strikes Back (1980).

From the same year, "Marion's Theme" from Raiders of the Lost Ark.

All the themes start with a major 6th progression -- you can see where I've marked "1" and "6th" on each score. In this case it's from D up to high B, because I've written them out in the key of D major, but of course in the films you hear these themes in various keys.

We can all agree on the sweeping, tender and impassioned qualities of these themes. But how is that down to the "major sixth"? It's not simply the two notes in isolation of course--it's the melody and harmonies as a whole. Within that whole, as Emilio Audissino writes, the "emotional leap" from D to the high B, which holds for several beats, "creat[es] an effect of longing [which] is typical of the romantic dialect" -- and evocative of classical romantic Hollywood scores. Miklos Rózsa's score for Spellbound (1945) is one example that comes to mind, and at the time point I've marked below, it's familiar in another way too...

Another way to make sense of this is to look at what happens when Williams subverts the idea to create a different effect. "Across the Stars", from Attack of the Clones (2002), is the theme that underscores Anakin and Padme's romance--a love that's "forbidden", complicated and, well, doomed. To communicate that very different set of emotions, the theme starts with a minor 6th interval:

So from D, we still go up to a high B...but it's a B-flat. It gives this affair a perceptibly darker, sadder flavour. Of course, again it's hardly the two starting notes alone that make the theme what it is. Nevertheless it's an interesting contrast.

We've looked at the romantic quality of JW's work; now let's turn to look at another mood he evokes particularly well -- the fantastic and otherworldly.

LYDIANA TONES AND THE SHARPENED FOURTH

Few are enamored with the fourth Indiana Jones movie, Kingdom of the Crystal Skull (2008). I was disappointed at the time, though have warmed up to it since. One of the things I do love about this film is the score, which I found to be as good as any of Williams's older work, both thematically and for its sheer tension.

The mystical skull motif, "Call of the Crystal", opens with a simple, repeating three note phrase (which we hear during the film whenever something related to the skull or its mythology is going on). You can see it on the bottom line of this excerpt:

These are tri-tones. (Not because there are three notes in the tune. The name doesn't matter for our purposes, but briefly, it's because the interval is 3 tones' worth of pitch wide.) A very crude way of defining a tritone is that it's a 4.5th interval (musically savvy readers, feel free to rebuke me if this is horribly bad form).

Listen to these two familiar tunes and note the intervals they start with (I've marked them).

What on earth does this have to do with why JW's scores are awesome? Well the tritone, banned by churches for centuries and referred to as "the Devil in music" or the "devil's interval", has a not-so-harmonious, rather alien-like sound. (Bill Bailey explains all of this brilliantly here.) Works perfectly as the mysterious call of the crystal skull.

And that augmented 4th interval at the heart of it also figures in a style of music writing that's very popular in science fiction and fantasy: the Lydian mode (now you get the pun in the title, right?).

The late film/TV composer Fred Karlin wrote: "[t]he Lydian mode has been used many
times to a sense of other-worldliness [...and] to suggest the presence
of an alien being or element."

If you imagine the keys of a piano, modes are found by playing the notes of a scale (for instance the D major scale embedded at the top of this article), BUT rather than starting the scale at the named note; rather, you start on a different note -- so, E rather than D, for example. What that means is you're playing a scale that (in that example) goes from E to high E, but feels quite different to a normal E major or minor scale -- you're in a different mode, and the result is something like The Beatles' "Eleanor Rigby".

The lydian mode arises out of playing a scale starting on its fourth note (so, for example, playing the scale of G major but starting on the C above it). Long story short, rather than a standard scale of C (below left), you have one difference (on the right)...

...an augmented 4th, which in this case is F-sharp.

Digressing a little from Williams, here's a piece by Michael Giacchino (John Locke's theme from LOST) where right from the start you can hear the scale of a lydian mode.

Now if you go back up top and look at the D-major scale you'll see it also has an F-sharp. So, Karlin writes, "because the C Lydian mode [...] includes major chords suggesting two different keys" (aka, C and D), it is apt for "expressing a mystical or dreamlike quality, or in contrast, a grandiose or heroic quality."

The classic JW case in point is E.T.--in particular this motif that ends the movie in a final peak of emotion:


If you're interested in learning more about the lydian mode and its frequent use by film composers to create an expansive feeling, I recommend reading Toby Pitman's article here.

That's it for this post, but if you have any questions, thoughts or corrections - if you just want to share your love of JW's music - please leave a comment below and let's continue this discussion!