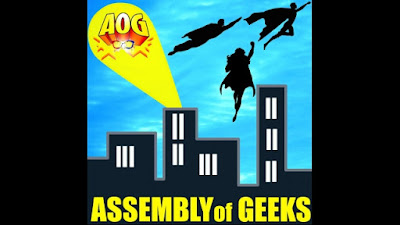 The latest episode of Assembly Of Geeks is available to listen to and the team get prepared for the third season of Agents of S.H.I.E.L.D.  Also Scott Murray talks to Clark Gregg on the recent comments Steven Spielberg said on comic book movies and in particular the danger that they could go the way of the western genre.  Here's what Clark Gregg had to say on the subject:

“Stephen Spielberg is so smart about film and the kind of films that land with a big section of the population.  I think what’s amazing about his work is a lot of it is…even in sophisticated adult stuff, there’s something about the storytelling that they connect with a child-like sense of imagination.  And certainly if the superhero movies become a stale trope and they’re just a formula being recycled, whether it’s the darker more docile DC version or the more you know, drama then comedy blend that Marvel does so magnificently, they’ll die.”

“But on the other hand, I’m 53, and I’ve been seeing superhero movies since I was a little boy.  It was Chris Reeve in Superman and you know, the great Batman series with Nicholson and Michael Keaton.  And then we had Spiderman.  I mean it’s a particular form of American mythology.  It’s about good and evil.  And what I’ve always loved about Marvel and why I’m glad I find myself in the Marvel camp is there was always a great examination of the social responsibility of heroism and kind of being the person who decides what’s good and evil…the costs that has on people.”

“…As long as they keep pushing the envelope and reinventing stuff it will stay live and fresh, and the fans of that, the fans of the genre, you know, they have to be very careful as I try to be careful in terms of ‘Wait, wait, wait!  This isn’t faithful enough!’  I hope they don’t stay too faithful.  I hope they continue to kind of reinvent these stories and the kind of whole template of the mix so that it more and more feels like it connects to the world.  That it’s an allegory for the kind of world of crime and punishment and good and evil that we live in now.”

You can listen to the whole show here and trust me it's worth a listen.