UFO Doc "I Know What I Saw Now Available To Watch. Spielberg Described It As "Compelling" 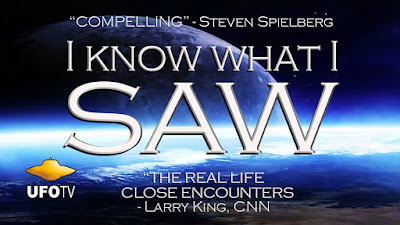 A UFO documentary called "I Know What I Saw" is now available to watch on Youtube.  This documentary was put together by James Fox who we reported on a few years back.  James actually received a letter from Steven Spielberg.  In the letter Spielberg tells James he has watched the documentary and wishes that some day the government will offer a total full disclosure on what they know on UFOs.  Here's the letter:

With great curiosity, I watched the documentary you sent over and found it compelling. Personally, I would like to think we are not alone, and even though I have devoted a generous percentage of my movies to extraterrestrial related themes, I for one have never seen a UFO. That is so unfair! (sic)
I hope you will continue to pursue this topic on your program, and that some day our government will offer a total disclosure about what they know about unidentified flying objects and their true and natural origins.
I continue to enjoy watching you and all your guests.

Signed: Steven
You can watch the documentary below which Spielberg described as "Compelling."  I've watched the video and I have to agree with him.