The latest comic deviates into an Obi-Wan Kenobi spin-off special, focusing on the time period when Obi-Wan is in solitude on tattoine, keeping an eye on a young Luke Skywalker. 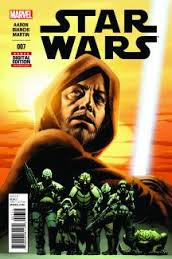 We start at an unknown town on Tatooine, and a moisture farmer is being bullied out of his water by a gang of Jabba The Hutt's cronies, Tatooine is in the grips of a harsh drought!  Obi-Wan sees the scuffle but cant intervene for the fear of blowing his cover and the inhabitants finding out he is a Jedi.

We see Ben's home in the desert, and we also see him looking over a young boys whom he thinks he should be training in the Jedi arts, but Owen Lars wont allow it.  Jabba's thugs turn up at the Lars' homestead to get the 'water tax', Ben however intervenes and uses a jedi mind trick to convince them to depart. 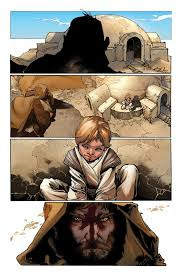 Ben goes back to town to try to barter for goods. Jabba's gang turn up again to bully the locals out of water, but be makes their guns jam.  He decides using his force powers is too risky and vows to not come to town again.

A young Luke goes missing during the night and is found in the desert by the gang of thug's, again Ben saves the day and takes an unconscious Luke back to the Lars' home. Ben feels spurred on by his encounter with Luke.  We cut to a panel of Luke sat in his X-Wing reading the diary that Ben left for him. 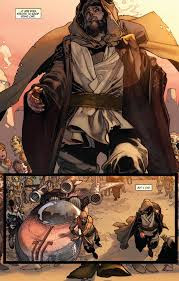 I was really looking forward to this issue as its set in a time period that we dont know much about and having previously seen the brilliant cover art work.  The overall idea is great, I like the journals idea and having the synopsis in the native language is a great idea and a good tie-in overall.

The art is great in most parts, although a couple of panels feel a bit hit and miss but I feel the story is too repetitve in parts, the amount of time Jabba's cronies arrive to wreak havoc feels a bit tedious at times.  This comic needs to be a bit longer, for instance its not clear why luke was wondering about during the middle of the night?
However it gives a good insight into old Ben's thoughts and feelings during his solitude, having to surpress his Jedi instincts and his battles with his emotions.
This comic was ok, I was a little disappointed, but I blame myself for setting my expectations too high.