In Star Wars #7 you may remember that the comic took a foray into the world of Ben Kenobi in solitude on Tatooine, we return with this issue to the previous story arc!

We return to the un-named planet where we saw to everyone's surprise, Han Solo's wife! After a bit of a verbal back and forth between Han, Leia & Sana Solo, Sana decides to give Leia up to the imperials and blows up Han & Leia's stolen shuttle! 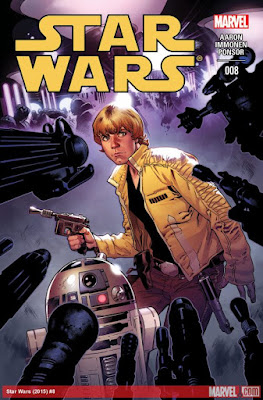 We cut to Luke Skywalker piloting his X-Wing and still on his quest to learn to become a Jedi Knight.  They Land on an un-savoury planet called Nar-Shadda and find a Cantina where Luke wants to find un-registered transport to Coruscant to visit the Jedi Temple.  Luke gets attacked, for seemingly no reason at all and ignites his lightsaber, an unknown assassin disarms Luke and steals his Jedi weapon.

We go back to Han & Leia, Leia pulls a hidden blaster and trains it on both Han & Sana believing that Han has set her up! They look to the sky, just as a squad of TIE fighters scream into view!!! 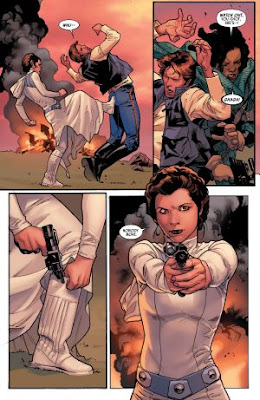 I really enjoyed this one, not much happens to be honest and its definitely a 'filler' as it were, keeping the story arc ticking over. If you were looking for answers regarding Sana Solo, I feel you maybe waiting a while.

The art overall was great, a few panels fell a little short, but not anything too bad.
The highlight of the story for me was the comparison that can be drawn between Luke looking for incognito travel options to Coruscant in a run-down Cantina full of non-desireables and him and 'Old Ben' doing the same in A New Hope

Join us soon for a review of the next Kanan instalment and thanks for reading.