The awesomeness that is Kanan: The Last Padawan continues in A Galaxy Far Far Away......... 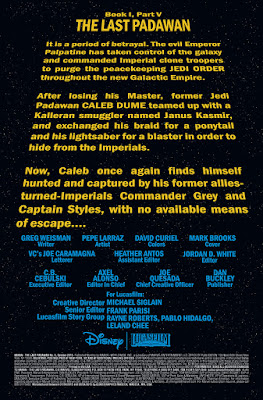 The Clones that were hunting a young padawan called Caleb Dume finally capture him and his new friends.
Back on the Clones' ship it transpires that the Clones were supposed to kill Caleb and not take him prisoner, he tries to appeal to the Clones' better nature and talk them into not killing him but they don't listen and the young Jedi, backed into a corner uses the Force to open an air lock which sucks him into the dark, empty void of space.

Just in the nick of time, Calebs friends arrive in their ships, see what has happened and somehow manage to get him aboard a ship.  The Padawan survives but they are closely pursued and attacked by the Republic turned Imperial clone ship.  One of the Clones has a crisis of conscience and decides that what they are doing wrong and opens fire on his allies to save the kid! 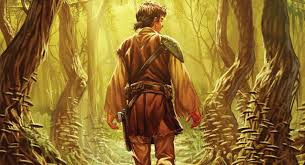 The friends have escaped and land , safe for now.  Caleb decides he needs to go it alone and takes a ship and the only items he requires, a lightsaber and Jedi holocron. He also decides that he is Caleb Dume no more, that name died with his master, he announces himself as Kanan, Kanan Jarus. 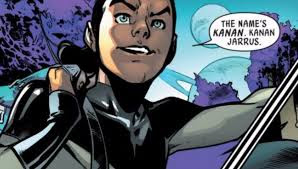 Suddenly we see an older Kanan being roused by Hera Syndulla in the cockpit of the Ghost ship from Rebels and their about to land on Kaller!

This continues to be, for me anyway Marvels best Star Wars comic series from the new batch!
Story line is intriguing and exciting and I look forward to reading the next panel, let alone the next comic and the art is superb.  The story doesn't try to cover too any aspects and jump from story line to story line like some of the others and just flows with ease.  The most interesting part for me was the individual Clone Trooper doubting that what he was doing was right?  We were led to believe that after 'Order 66' the Clones were made to follow orders without question or compromise.  And if you remember back to The Clone Wars TV series, the clones were implanted with chips in their heads, one of the Clones had a defective chip, maybe this is the case?!