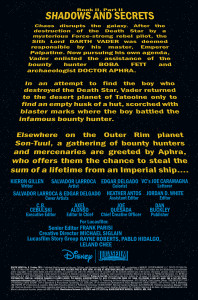 We join Vaders assistant 'Aphra' on a ship in the Outer Rim accompanied by some bounty hunters, they attack an Imperial Ship, board it and still some loot.  Some of the loot disappears into deep space though when the Astromech, who is key lets some go.  Back safe on their own ship, they share out the loot.
We cut to Aphra meeting with a Wookie in a cave who was actually posing as one of the Bounty Hunters, in a clever double cross move, they siphoned off the lost loot for themselves, as the Wookie departs Aphra the archaeologist promises to help him with his 'problem'.

At last Vader appears beside her in the cave. She asks him for help in aiding the Wookie but Vader gives her what appears to be a mission to complete within  a month. 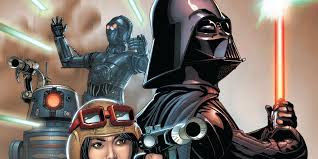 Skip to 'Tagge' , an imperial you will recognize from the round table on the Death Star from A New Hope, he is briefing Vader and the rag tag cronies the Emperor lined up to replace Vader, giving each in the group a mission to accomplish.  After the group are dismissed Tagge tells Vader that The Emperor wishes him to have a new assistant, who is a monocled moustache wearing Imperial called 'Inspector Thanoth'.


This issue was all over the place, there was no continuity and some of it really didn't make sense! This was definitely a 'filler'. I'm hoping so anyway.  I've read the comic three times but the story just skips here there and everywhere and is baffling.

On a positive note the art is awesome and may be the best I've seen in the new Star Wars comics, Tagge is instantly recognizable, and nice to see a familiar face from the original film.  It also appears that Vader is also a sub-ordinate to Tagge, and the Sith Lord shows great restraint when being openly mocked by The Emperors weird Cyber gang we saw in previous issues.