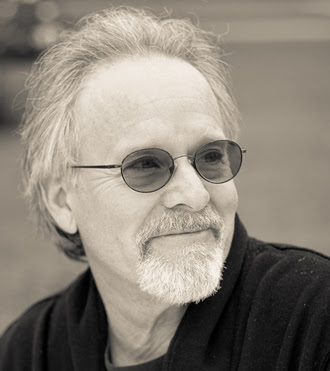 A few weeks back I was lucky enough to catch up with author and composer James Kahn while at a local comic con.  James novelized Star Wars Episode VI: Return of the Jedi, Poltergeist, Indiana Jones and the Temple of Doom and The Goonies to name a few.  He's met Steven Spielberg and George Lucas and I just had to get an interview for The Bearded Trio.  Here's what James had to say:

You've novelized many blockbusters during your career. Which one gave you the greatest challenge?

Probably Poltergeist.  I had a one month deadline to write it and I wanted to incorporate a lot of new material that came from my own experiences, and weren’t in the movie.  I had to write 15 hours a day for 29 days.

Was there a movie you wish you could have novelized?
Yes, I was asked to novelize Indiana Jones and the Last Crusade, but I was head writer on a TV show by then – Family Medical Center – and had to turn down the novelization due to time constraints.  Would love to have worked on it though.

If you could give just one bit of advice to anyone writing their first novel what would it be?
Rewrite.  All writing is rewriting. Get down a first rough draft that’s at least a plot skeleton, and then later go back and flesh out the characters, give them some backstory, motivation, conflicts, desires.  And then go back and do it again.  Then wait a couple months, and do it again.  It only gets better each time, and you always want to show people your best effort.

You were lucky enough to work on the set of E.T. How did that come about and can you recall the first conversation you had with Kathleen Kennedy and Melissa Matheson about resuscitation an alien?
I was working in an ER in LA when Kathleen Kennedy called the front desk and asked if anyone there could help her figure out how to resuscitate an alien.  The desk clerk knew I was a writer, so she steered the call my way.  Kennedy and Melissa Matheson, the screenwriter of ET, came down to the ER and two of us showed them how to run a resuscitation- I played the role of the victim (I didn’t yet know this was ET’s role).  They liked what they saw, so they invited several of us down to the set where ET was filming.  We all suited up in Hazmat suits and shouted out all that ad lib dialogue while we were pounding on ET’s chest

I’m guessing this led to your first encounter with Steven Spielberg. How did that go? What was the director like in person?

Yes, I met him on the set while he was directing the film.  He was a very nice guy, very low key, down to earth, excited about directing.  I gave him a copy of my first sci-fi novel, World Enough and Time.  By coincidence (or destiny) he told me he had a copy of it at his bedside – a friend had recently loaned it to him.  I asked if he’d like to make a movie out of it.  He said he was a little busy – but he passed the book on to producer Frank Marshall, who liked it enough to assign me the novelization of Poltergeist.

Any stories on Spielberg you would like to share that haven't been told before?
Just what a great director he was.  I got to watch him work that week of ET’s resuscitation.  Directing Henry Thomas, he got down right at kids’ level and talked to him like another kid describing the upcoming scene.  And directing the actual death aftermath.  It was so moving stage hands were crying

You novelized Star Wars Episode VI: Return of the Jedi and Indiana Jones and the Temple of Doom. What was it like working with another of the bearded trio, George Lucas?
George was kind of distracted and overwhelmed by his own success.  He was very nice to me but clearly so much on his mind I didn’t get the feeling I had his full attention.

Are you looking forward to The Force Awakens and if asked would you consider writing the novel to the film?
Very much looking forward to it.  JJ Abrams did such a great job of rebooting Star Trek, I think he’s going to do a great job with rejuvenating Star Wars – He’s also a huge Star Wars fan.  I’d love to write another novelization for them, but Alan Dean Foster is doing The Force Awakens.  I’d certainly love to do any of the subsequent films.

I wrote the TNG episode as a freelancer – it was a one-off.  That means the writing staff and
producers listen to my pitch idea, they like it, they say go ahead and write it, they pay me- and then I’m out of the picture.  They do all the rewrites.  As a supervising producer on Voyager it was much different.  I was in the writers’ room every day with the whole staff,.  I helped guide the story breaking sessions, sometimes I ran the room.  I sat in all the casting sessions. I sat in all the production meetings with all the department heads for every episode, contributing to set design, wardrobe, lighting, whatever needed addressing.

Who was the biggest joker on the set of Voyager? I’ve heard Tim Russ likes to let out some emotion having played a Vulcan all day.
I actually didn’t spend much time on the set – much more on the writing/producing end of things.

When writing an episode of such a popular TV series what is the secret to keeping the consistency with the characters from previous episodes? Are you able to bring your own little interpretations?
Every writer brings a little piece of himself to the table when stories are created and scripts written.  A show with such a long history as Star Trek, though, there are certain conventions that have to be followed.  In dialogue, for example, you had to have a very good reason if you wanted a character to talk using contractions – most of the speech patterns were rather formal.

You worked on William Shatner’s TekWar. Did you get to meet him and what was he like away from the cameras?
He could be a very nice guy. He could also be very demanding.  He liked my episodes, so he was always nice to me.

Back to the Steven Spielberg now and do you still keep in touch?
I haven’t talked to Steven in almost 30 years.  Our careers just took us to different places.  He stayed in features, I stayed in TV.  He soared to the heights of a mega career, I ended up being kind of a working writer.  Everybody knows his name, not many know mine.

Do you have a favourite John Williams soundtrack?
It’s hard not to love Star Wars. Indiana Jones is pretty great though.

What are you doing with yourself these days?
Just starting to put together my own small indie feature, “Wrongside Bob,” A comedy/drama about a drifter with amnesia struggling to remember his past, running into a quirky old guy in a bar who’s desperately trying to forget his past.  It’s inspired by a cd of Americana music I released a few years ago, Man walks into a bar.