DID THE GHOST OF ET PHONE SPIELBERG AND INVITE HIM TO THE ISLE OF SKYE? 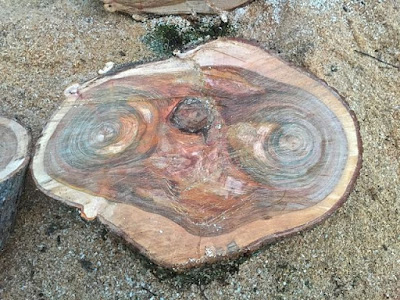 Hotel owner amazed at second close encounter in a year

Hotel owner Billy Harley recently found the image of ET in a log he was chopping to warm guests in the bar at the Uig Hotel. He has nicknamed the log 'E-Tree'.

Now the ghost of ET has lured the man who adapted his story for the big screen to the Isle of Skye, with filming taking place right behind the hotel.  Spielberg is currently bringing Roald Dahl’s the BFG (Big Friendly Giant) to the big screen.

“The Isle of Skye is magnet for filmmakers all over the world,” said Billy Harley.  “We had a crew filming Prometheus a few years back and now this.  It’s weird that all these films about monsters and aliens are made here.  We’re quite a friendly island really.”

The filming took place in the Fairy Glenn directly behind the Uig Hotel.  “We heard a strange rustling and I phoned home.  My wife did a quick Google and found the news that our forest is going to be in a Spielberg movie.  I went up to have a look but by the time I got there they were gone, so I missed out on a close encounter.  I hope I’ll be able to buy Mr Spielberg a pint next time he’s here.  I’ll be right here.”