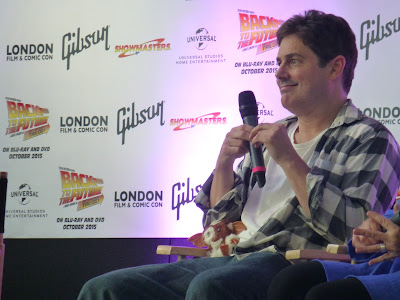 Gremlins star Zach Galligan recently attended London Film & Comic Con and while he was on stage talking about the 1984 classic movie I asked him what his thoughts are on the heavily talked about reboot of Gremlins.  Here's what he had to say:

"I might as well get the speculation out of the way.  So let me just say I will answer the question with a certain caveat which is it's now been 25 years since Gremlins 2 even came out and there have been so many rumours and innuendo, and the bottom line is a lot of stuff doesn't really come to fruition, even though it gets announced.  But I would say this, I personally feel, for the first time in about 25 years, I feel that actually (it may be possible.)"

"I wouldn't even really call it a reboot because Chris Columbus did a bunch of interviews in April.  As far as I was concerned he kinda slipped a little bit and he kept referring to it as a sequel and they asked him if it was going to be a remake, to which he said absolutely not.  We're not going to remake the first one because the first one is very near and dear to my heart, which is true since it was one of his first scripts and he wrote it, and he's very proud of it, so the last thing he wants to do is reboot it."

"Then he (Chris Columbus) went on to say that he loved the way JJ Abrams is approaching stuff like the Star Trek series right where he brought Spock back and then he talked about how he saw Han Solo and Chewbacca in the Star Wars trailer, and how he basically got choked up, and so he said that's what he's looking for, the power of nostalgia and that he thinks that JJ Abrams has really tapped into that brilliantly, so I don't know who the Han Solo and Chewy of Gremlins 1 and Gremlins 2 is so I don't know."

"Still, we'll see what happens. I know they hired a screenwriter, this guy called (Carl) Ellsworth. He's writing away and I know that Spielberg still owns the property that's attached, and he and Chris Columbus are working together so I would say I'm more optimistic than I've been since Gremlins 2 was completed that they'll actually come up with something, and it'll probably be like a combo burrito type thing like they did with Jurassic World, where it takes into account the old films and it has people like B.D Wong back in it, but it also introduces new characters, so I think that Hollywood's realising now, why do you need to alienate the old audience for the sake of the new audience? Why can't you just put them together and have the best of both worlds. So that's what I think they are doing."

Zach then talks about his thoughts of a sequel or reboot and whether it was ever going to happen:

"I'm surprised. I thought it was never gonna happen and if it did happen, I thought that it was just gonna be a complete reboot like they did with Robocop.  I didn't think it was gonna take any of the old characters into account, but like I said, Chris Columbus said I can't talk about it, I can't, it's top secret. I can't talk about it.  And the guys said are there going to be new characters? And he kinda slipped and said well, there are going to be some new characters, and as soon as I read that I thought well if there are going to be some new characters, doesn't that logically mean that it's gonna be mostly older characters.  If you went to Burger King and they said well there's some new burgers, wouldn't that mean there's mostly old burgers?  So that's what I took from that."

You can watch the first twenty minutes of the talk below.  I'm the one asking the question on the Gremlins sequel