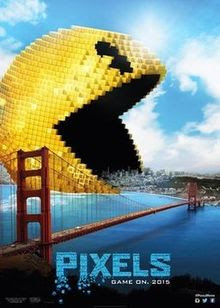 Pixels is the summer tentpole action comedy in which aliens attack the Earth, using
1980s videogames as the model for their attacks, produced by Happy Madison and 1492 Pictures.  Taking the helm of Pixels, Chris Columbus helped define 1980s movies as the writer of Gremlins and The Goonies, then went on to direct beloved, classic comedies like Home Alone and Mrs. Doubtfire, and help launch epic, special-effects blockbuster franchises like Harry Potter, Percy Jackson, and Night at the Museum, Columbus says that Pixels appealed to him in myriad ways.  “Reading the Pixels script felt so original, so unique, that I just had to do it,” he says.  “I loved the blend of comedy mixed with action, which gave me an opportunity to do something I hadn’t been able to do since Harry Potter.  It enabled me to push the comedy as far as we could, but also create this very intense action adventure film.  For me, it’s Gremlins meets Goonies meets Harry Potter – it gave me the opportunity to create something really fresh using the tools I had gathered over the years.  It would be an original summer movie that took you back to the 80s in an evocative, nostalgic way.”
The project stars Adam Sandler, who also serves as a producer of the film.  Columbus says that being able to serve both roles benefits the project.  “Adam has a great sense of comedy and is a very savvy producer,” says Columbus.  “That’s a great combination, because – for example – he completely understands when something’s working and we can move on, or when something’s not working and needs a little more time to get it right.”
The list of the film’s pixelated co-stars reads like an all-star team of the 1980s: PAC-
MAN™, Donkey Kong™, Centipede®, Galaga™, Frogger, Q*bert™, and Space Invaders™, among many others.  “These classic characters were part of the DNA of the project, so it was critical that we work together to bring them on board,” explains Allen Covert, one of the film’s producers.  “Fortunately, they were all extremely receptive. We approached them with a deep love for their characters and a respect for the elements that make them unique and iconic, and we worked with the companies to incorporate those elements into the film.” Partners included Atari Interactive, Inc. (Asteroids, Breakout, Centipede, Missile Command); Konami Digital Entertainment (Frogger);
Bandai Namco Entertainment (PAC-MAN, Galaga, Dig Dug); Nintendo (Donkey Kong,
Duck Hunt); Sony Computer Entertainment (Q*Bert); TAITO CORPORATION (Arkanoid,
Space Invaders); and Warner Bros. Interactive (Paperboy, Joust, Defender, Robotron), G-MODE (BurgerTime), and TETRIS (Tetris).
Columbus adds, “There would be no way to make the movie without these legendary characters – they are as important to the film as the roles that the actors are playing. It was a real thrill to see everything come together exactly as we envisioned it.”
Executive Producer Michael Barnathan, who also serves as president of Columbus’ company, 1492 Pictures, adds that the filmmaking team also found 1980s inspiration in other ways.  “I think everyone involved with this movie has a great love for the great summer action-comedies of the 1980s,” he says.  “We definitely wanted a movie for today’s audiences, but our goal was also to capture something of the feel that made those movies so special – that mix of action and comedy that the movies of that era did so well.”
Columbus says that one other reason he felt attracted to the project was the chance to make a film that would truly appeal to audiences of all ages.  “Of course, the parents out there are going to remember playing these games at a video arcade, and their kids will be just as amazed by the characters – there are a hundred jokes in the movie that work for parents, and a hundred that work for their kids,” he says.  “But it’s more than that.  I think there’s a lot of nostalgia for these games and about the 80s in particular.  I certainly hear it all the time – I talk to college kids and their favorite movie is The Goonies.  There’s a lot of love for that era right now.”

After developing the project at Happy Madison, they began to seek a director who could shepherd it to the screen.  “We thought Chris would be the perfect director for this movie,” says Covert.  “He’s directed giant effects movies and some of our favorite comedies and Pixels was a combination of those two elements. He is so great at blending stunning visuals with outrageously funny actors and making it believable. ”
Executive producer Michael Barnathan agrees, adding another element: “Ultimately, movies are about story.  One of Chris’s greatest talents as a director is making sure that these other elements – the comedy, the effects – are all working to move the story forward in a satisfying and emotional way.  We all thought Pixels represented an opportunity to be a perfect match between the material and everything Chris does well as a director.”

ATTACK OF THE VIDEOGAMES: DESIGN AND EFFECTS 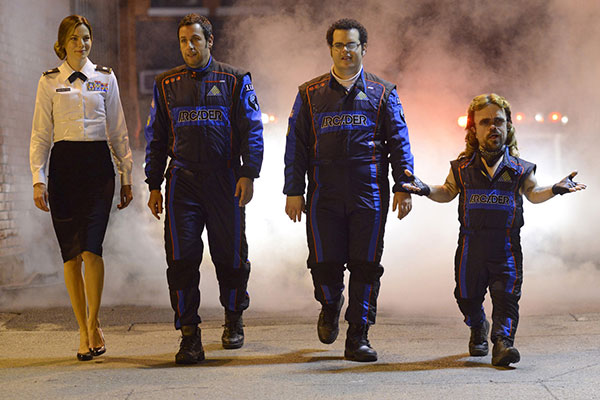