I Get To Ask Michael J. Fox A Question At The Press Conference At London Film & Comic Con 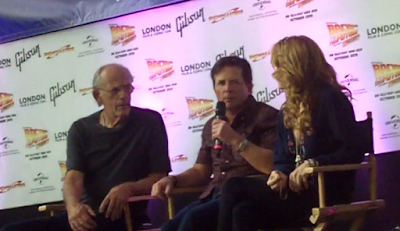 At this year's London Film & Comic Con I was lucky enough to attend as a member of press and the nice people at Showmasters who organise the event reserved a "question spot" for me at the Back to the Future reunion press conference.

Now I ask what it was like working with two greats, Robert Zemeckis and Steven Spielberg.  Michael J. Fox answers.  It's right at the end of the video.

A few things to note about the recording.  First the sound isn't the best.  There seemed to be a problem with Michael's microphone and was making clicking and popping noises.  Secondly when it came to my turn to ask a question I was so zoned in on asking Michael I forgot to control the camera for a second.  Fortunately my wife was on hand to steady the camera while Michael talks directly to me.

Michael J Fox said: "Bob is a force of nature, he is an amazing guy, has an amazing mind and amazing energy. We would be doing a scene and it wouldn't be working and we couldn't figure out how to do it and he would just stay there all night.
"People would go, 'We are going to shut this down while he figures this out', and we would say, 'No, he is going to go all night long until he figures this out'.
"It could be something as simple as a prop in the wrong place. He was just a stickler for detail, and I think Steven was a perfect mentor for him.
"Steven never imposed himself on the process, he was just hanging in the background. I think he had a great relationship with Bob and it came off successfully."