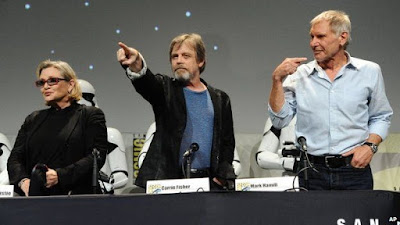 Harrison Ford, Carrie Fisher and Mark Hamill were amongst other cast members of The Force Awakens on stage yesterday at San Diego Comic Con, the largest comic con in the world.

Harrison Ford was the last to be revealed on stage and it was his first appearance since his plane accident.  He said:

"I'm fine," Ford reportedly said. "I walked here so how bad can it be?"

"It should have felt ridiculous," Ford said about stepping back on to a Star Wars set after such a long period.
"It was 30 plus years ago, and I sort of grew up. Yet here I was. I will tell you that it felt great."

As well as being given the chance to ask questions, the audience was also the first to see a three-minute behind the scenes video. The clip showed scenes being shot abroad and at Pinewood studios in Buckinghamshire.

Also on stage was Kathleen Kennedy, Lawrence Kasden and the director, J,J. Abrams.  Abrams said they have a cut of the movie but thanked Disney for giving them the time to make sure the movie is right.