SAVAGE EMPIRE, has launched a crowdfunding initiative through Kickstarter in Vancouver, Canada. Aiming to raise $14K, the project has already raised over $9K and is scheduled to end on July 2nd, 2015.

Written by a 20 year gaming development veteran, SAVAGE EMPIRE is born from the closure of DIsney's Vancouver gaming studio, Propaganda Games. Tim Lewinson, senior designer of their flagship first person shooter TUROK for the Xbox 360, PlayStation 3 and PC, wrote the science fiction script after being inspired by the success of the 2M dinosaur-based franchise.

"I've wanted to tell the story of SAVAGE EMPIRE for years,” Lewinson said. “In reality, it's a tribute to a lot of great friends I made at Propaganda Games, many of whom had to leave Vancouver to find work after the studio's closure. We worked hard, with access to cutting-edge technology and bonded with some of the most creative artists, designers and coders in the world. This volume is as much for them as it is for me."

Chris Bourassa, (@bourassaart) Creative Director and artist of the Kickstarter-backed game DARKEST DUNGEON, will be creating a new piece of artwork only for SAVAGE EMPIRE project backers, drawn in the inimitable DARKEST DUNGEON art style.

Tim Lewinson, writer of SAVAGE EMPIRE, said, “DARKEST DUNGEON was a crowdfunding inspiration, not just for Vancouver studios, but game studios worldwide. I was proud to be a backer and it’s great to see their dream come to fruition. Having seen Chris’ amazing work firsthand when we were colleagues at Propaganda Games, accepting his offer to bring the visuals of DARKEST DUNGEON over to SAVAGE EMPIRE was a no-brainer. Chris’ support is appreciated and I can’t wait to see our characters drawn with his distinctive style.”

Bourassa said, “It's great to have an opportunity to support an ex-coworker and fellow Vancouver-based Kickstarter campaign – I’m looking forward to contributing an amazing piece for SAVAGE EMPIRE backers!” 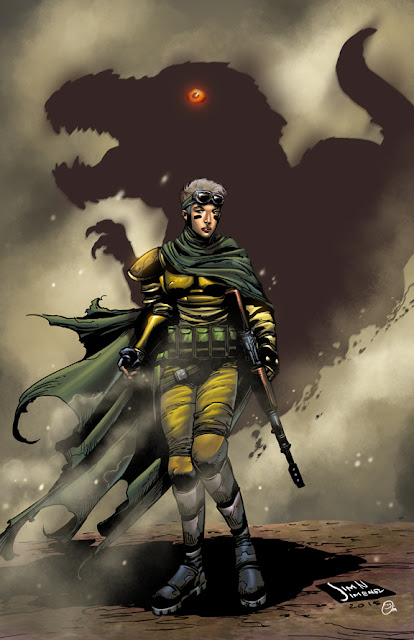 SAVAGE EMPIRE is "Jurassic World" meets "Black Hawk Down" in graphic novel format. The story is one of a massive earthquake in the Los Angeles area, triggered by government experiments with time travel. As portals open to ancient worlds, the original apex predators enter our time, and the leader of a rescue squad must balance her responsibilities inside the danger zone against the presence of a mysterious mercenary assigned to her team.

Highly recommended by film writer Gary Whitta ("The Book of Eli", "After Earth", "Abomination" and Disney's 2016 "Star Wars: Rogue One"), SAVAGE EMPIRE has the potential to turn into the transmedia property of the year. Intersecting the world of dinosaurs ("Jurassic World") and earthquakes ("San Andreas"), along with the tension-filled atmosphere of the original TUROK first person shooter, SAVAGE EMPIRE is an epic adventure from beginning to end.
Currently crowdfunding on Kickstarter (http://savageempire.org)


ABOUT THE AUTHOR: Tim Lewinson is the former gameplay director for the DAWN of WAR series and COMPANY OF HEROES from Relic, senior designer on TUROK from Propaganda, executive producer of Capcom's WORLD GONE SOUR, and a veteran of many EA SPORTS properties such as NHL, NBA and NEED FOR SPEED. He is the principal director of Likes to Fight Studios, developer of the SAVAGE EMPIRE franchise.