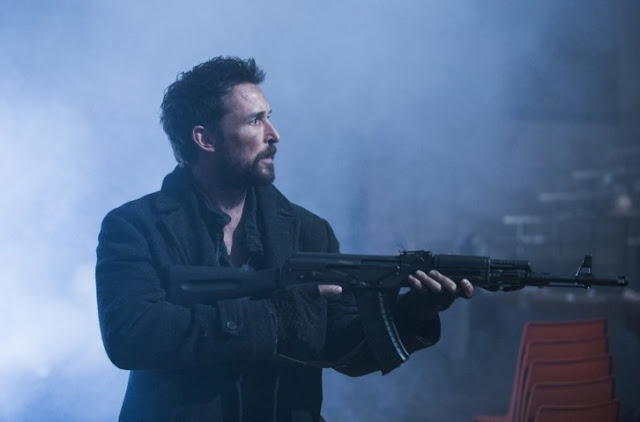 Season five and the final one of Falling Skies is just about to explode on to our TV screens and series lead Noah Wyle says the ten episodes are "some of the best we've ever done" and promises a strong ending to the series.  He does tease also saying that not all will make it out alive by the end of the series.

Here are the titles and synopsis of each of the season 5 episodes (Possible weak spoilers:)

Episode 1 is titled Find Your Warrier: "Tom's life hangs in the balance as his beamer drifts into space; Tom encounters a surprising guest."

Episode 3 is titled Hatchlings: "The 2nd Mass discovers the source for the seemingly endless supply of enemy forces. Hal disobeys his father."

Episode 4 is titled Pope Breaks Bad: "A mission to procure vehicles and fuel goes awry, and a desperate Pope takes things into his own hands. Cochise shares troubling news with Anne."

Episode 6 is titled Respite: "Tom takes refuge with a family that has distanced itself from the fight."

Episode 7 is titled Everybody Has Their Reasons: "The 2nd Mass arrives at a functional military base run by Weaver's former flame."

Episode 8 is titled Stalag 14th Virginia: "Weaver discovers the shocking truth about an old friend; Maggie and Isabella work together."

Episode 10 is titled Reborn: "The final standoff brings the Masons, the 2nd Mass and their new allies into an iconic location."