By Unknown June 28, 2015
So this is a double episode which is a taster for when the season starts proper in the autumn/fall depending on where you are.
For those that don’t know, Star Wars Rebels is an animated TV show on Disney XD that’s takes place between Revenge of the Sith and A New Hope.
'A brave and clever ragtag starship crew stands up against the evil Empire as it tightens its grip on the galaxy and hunts down the last of the Jedi Knights.' - IMDB

As per usual Spoilers apply from this point in! 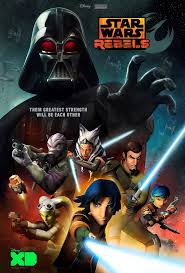 A long Time Ago In A Galaxy Far Far Away....

We join our rag tag band in a space battle as they try to steal some cargo from an Imperial convoy. They succeed and jump to Hyperspace.
Back on Lothal the imperials are still persistent on reigning havoc and capturing the rebels.  Enter Vader to clear up the mess that his understudies have failed to clear up. He threatens Minister Tua with a visit from Tarkin!

In a panic Tua contacts the rebels and is willing to trade secret Imperial Info for safe passage off the planet. They hatch a plan to evacuate the Minister and return to Lothal. However Ezra gets a bad 'cold' feeling on the way. 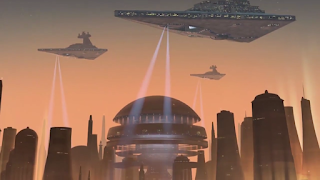 When they land there is a heavier Imperial presence holding the planet in a vice like grip. In order to progress with the plan Kanan mugs a Stormtrooper of his armor and wears it as a disguise.  However, the plan goes awry when the Minister arrives at the rendezvous point with mutton chops himself, Agent Kallus! A firefight ensues and the shuttle that was going to going to aid the evacuation explodes, killing the Minister and the secrets she held within! Looking on from a distance is a certain Dark Lord Of The Sith! The rebels flee and go underground...literally!

They hatch another plan and decide as the Imperials are all hunting them that their stronghold will be somewhat deserted and they can steal another shuttle to make their escape. Kanan and Ezra get through security in disguise by using a mind trick on a weak minded Stormtrooper, once inside they are joined by rest of the gang, however it’s a an elaborate trap by Vader and he arrives dramatically to kick Ezra and Kanan's butt in a lightsaber fight. As a distraction Sabine blows up some walkers and they fall on Vader who survives and the rebels escape on the stolen shuttle. 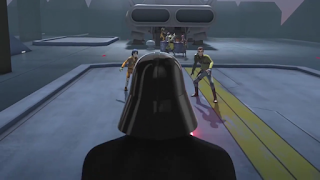 They realise they must leave the planet and seek the help of Lando, who although off planet directs them to his strangely southern speaking droid who sets them up with machines to throw the imperials off their scent to aid their escape off world. The plan works, but unbeknown to the group Vader has left a tracking device on their ship and when the rebels arrive at their new fleet of Rebel friends, shortly after Vader arrives alone in a TIE fighter and proceeds to take out Phoenix Fighter squadrons A-wings and attack the fleet single handed with some fancy flying and all out bad assery! Vader realises that Anakin's apprentice lives and Ahsoka feels him through the force too!

The fleet and the rebels escape whilst Vader is incapacitated by his own Star Destroyers!
Aboard his Star Destroyer Vader gets a message from the Emperor instructing him to dispatch another Inquisitor to pursue the Rebels.... 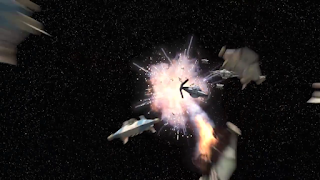 This really feels like the first film, both visually and by sound, the music is fantastic. And there are a few moments that really take me back.  The ships inside have a 'A New Hope' feel. Kanan and Hera also have a 'Han and Leia' moment and Kanan and Ezra use mind tricks on the Stormtrooper ala' Ben Kenobi in Mos Eisley. Of course Kanan dressed in disguise as a 'Buckethead' wreaks of Han and Luke. These are all great tributes to keep you wanting more and enticed.

After a while you tend to forget you are watching a children's animation program, this definitely has more of an adult 'feel' to it. I'm surprised they crammed so much into one episode straight away. My thought is that they are going to book-end the series, not very episode is going to be great...remember 'The Clone Wars?'

Vader is Bad Ass and his parts are very dramatic, which is the way he should be! He's a schemer, superb pilot and stronger than ever! And being voiced by James Earl Jones just enhances the experience. 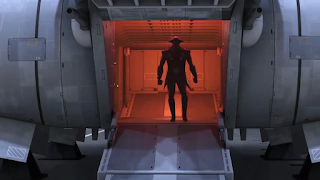 Ahsoka has a small part to play, does she know it's Vader? Ezra has taken on a lot more responsibility and is clearly gaining respect from his peers by making decisions and hatching plans, although attacking Vader wasn’t wise! Whilst the rest of the rebels crew are happy to be fighting alongside the other rebels, Kanan doesn’t want any part of it and would rather go back to the way things were, he doesn’t want another war and given how the last one went, I don’t blame him!